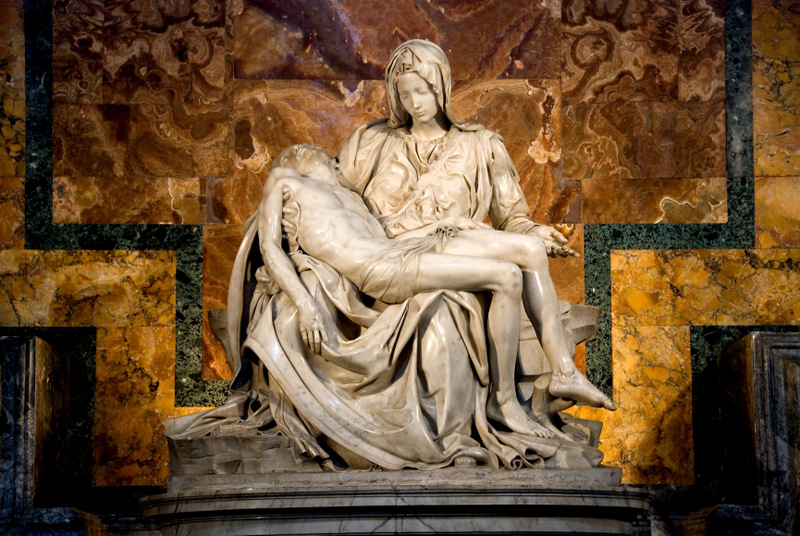 There’s an aura surrounding certain men where their talents seem so supreme that it’s as if God paid just a bit more attention in creating them for a single purpose. To watch Pirlo make plays, Brady throw touchdowns, Mayweather throw hooks and catch jabs with his shoulder and to come out of a 12 round battle almost unscathed, is like watching a tiger hunt or a bird fly, they are where they’re supposed to be and they’ve perfected what they’re supposed to do.

Walking into the Sistine Chapel this feeling of being in a presence of a mortal who has evoked the divine through his talent was even stronger. You feel butterflies and a tad shortness of breath and a profound, crippling insignificance. You realize the time you’ve wasted and accept that you’ll continue to do so or, for the moment, you pledge to do do so no longer. This single chapel, if it were his only work of art, would be enough to warrant ten lifetimes of talent and masterpiece, but it wasn’t. Michelangelo had more, many more.

Walking through the streets of Rome you see them. You see their replicas outdoors then the originals indoors, in museums and churches and in Rome they’re basically the same thing. You wish you had this talent, this gift, then, as if God’s hand reached down and slapped you in the face you hear the man’s words…

“If people knew how hard I had to work to gain my mastery, it would not seem so wonderful at all.” ~ Michelangelo

When we see the Sistine Chapel from the inside, when we see the David, we’re in awe of their beauty, the perfection, the grandiosity of the scale and the significance each of these works that were created by a single man have taken in history. But we don’t see the hours, the time, the focus. We don’t see the sweat and doubt. The doubt in that first brush if the work would be good enough or how long it will take to finish. The Sistine Chapel took 30 years of one man’s life to come to fruition.

A single work of art that took 30 years to complete.

Which one of us had the discipline, the belief, the pride, the longevity and the focus to work on something with a singular vision for 30 straight years?

Yet many of us complain that we don’t have this talent given by God. We curse our Maker or whatever we believe put us here, or we curse our parents for giving us shitty genetics not realizing that this talent would have been wasted on us, men without persistence and discipline and grit.

The breathtakingly beautiful talent that has found Pirlo’s foot, Brady’s arm, Mayweather’s fists, and Michelangelo’s hands wasn’t given, but earned. Deserved through persistence and time and effort and practice and a hell of a lot more failure in one work that we’ll have in one life.

If you’re waiting for talent, you’re going to die waiting for talent. If you’re wishing for a gift, you’re going to die wishing for a gift. Work. Earn your gift. Earn your talent. Perfect your craft by toiling in mediocrity for 30 years, focused on a single task, perfecting only one craft. While others party and drink and spend their money, throwing it a way, work. It ain’t sexy and you can argue that you’re missing out on life in the process. But argue all you want, I’d rather be a master at one thing than an amateur at everything.

Next time you have the pleasure of watching a master at work or a master’s work, revel in the years and hard work that preceded their current air of grace, their divinity in their craft. Don’t wish for their talent, pray for their persistence. Don’t crave their gift, earn their brilliance.