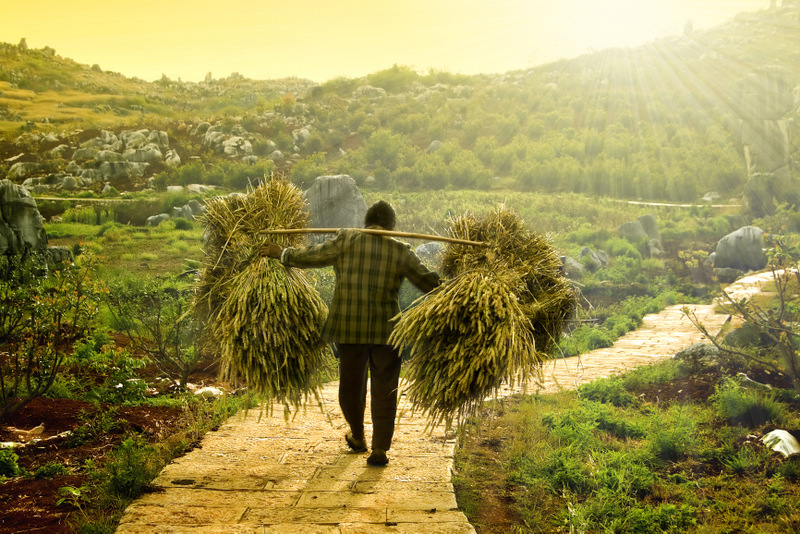 “Determine never to be idle. No person will have occasion to complain of the want of time, who never loses any. It is wonderful how much may be done, if we are always doing.” ~ Thomas Jefferson

The word “work” is far too often spoken with a tinge of resentment. Many of us resent where we are and we’re cynical about where we think we’ll end up neglecting to see that the choice for our mood, even in the midst of the worst conditions, is under our control.

People wish to do what they love regretting the fact that they’re doing what they must. What’s good for the individual? Is pure work reward in and of itself, or does there need to be a greater purpose or meaning to the focus of the effort?

The answer is both.

Work is reward in and of itself even if what you’re doing isn’t fulfilling, working and earning and having something to show for your work is. If you can find something that is both rewarding, fulfilling, and something you love to do, then you’ve found the best of both worlds, but it will still be hard, there will be risk, and the grass is always greener on the other side of the fence when you’re penniless, holed up in your home working 17 hour days wondering when you’re going to break through.

[Tweet “Instead of finding what we love to do we should find the love in what we’re doing.”]

Martin Luther King Jr. has one of the greatest quotes I’ve come by. Most people cite quotes talking about “loving what you do”, or “following your passion”, but MLK saw the value in doing whatever you’re doing as best as you possibly can, seeing mastery even in the simplest most medial tasks or jobs as a source of pride. The man with pride will do everything he does to the best of his abilities. The man with a brain will do the same because he knows that to do otherwise, to wish he were somewhere else, to do things half-assed is not only a waste of time but a waste of life and a waste of talent.

Most people wait around to do one great thing greatly, while failing to dare mightily in their everyday activities. Not surprisingly this line of thinking and acting leads to nothing of great value done and a deathbed filled with regret.

Give all of yourself in everything you do. This is the secret to living a happy and fulfilled life. The secret to a life of meaning isn’t finding something that you love to do, it’s doing your best even at those things that you hate doing.

As Image Becomes Everything, Meaning Is Lost.

If people knew how hard I had to work to gain my mastery, it would not seem so wonderful at all.  ~ Michelangelo

Image is everything in our society. Substance and values have been replaced by credit card debt spent on clothes and cars and homes that none of us need or really want but we feel we should buy and have and show off. We buy because it “makes us feel good” but it’s a fleeting feeling with an empty core. There’s no value or substance in things. And there’s always someone with more things, more money, and a bigger home.

If our self-worth is guided merely by money and things we’ll never be at peace, we’ll never feel successful, and we’ll always want more things and more money. Money can be a great thing, it can be the root to freedom and a fine measuring stick for success in your business, but the business has to bring you meaning and that meaning is a choice, it doesn’t automatically happen, you have to work for it. Earn it. Toil through it.

Meaning and purpose, these things can’t be bought but they have to be earned. Michelangelo’s first stroke of the brush wasn’t the stroke of a master painter, but his last was.

I mention debt earlier because it goes hand in hand with entitlement. We buy what we can’t afford because we feel entitled to that thing that we want to have even if we haven’t earned it. We think, I’m good enough for this, I’ve worked hard, I deserve this even if I can afford it because I’ll pay it back later.

[Tweet “What you deserve in life is what you have. Period.”]

So forget about that vacation you had planned, if you haven’t earned it, don’t take it.

Forget about that car or that shirt or those clothes, if you’re starting a business, that’s the only thing that should be getting your money and your attention.

Forget about finding your passion, work hard at everything you do. To do otherwise wreaks of laziness and self-entitlement and a man who has no clue how fragile life is so he squanders it in mediocrity when greatness is within everyone’s grasp.

By All Means, Wait. I Will Work.

Things may come to those who wait, but only the things left by those who hustle. ~Abraham Lincoln

Pure, hard, gritty work is undervalued today, but if you as an individual can recognize just how important it and discipline and persistence are, then you’re well ahead of the curve and on to a life of both value, meaning, and happiness.

Jefferson’s quote at the beginning of the article says it best, it’s not a matter of working or not, it’s a matter of doing something with your time in a time when far too many of us squander our time pushing what we must do to be successful to tomorrow when tomorrow never comes. We watch TV, we facebook and tweet and socialize.

We take the view that there may not be a tomorrow so I may as well spend today with friends, creating memories, laughing, drinking, dining, instead of taking the stance that time is indeed precious, so create something and do something of value with your time rather than squandering it in a collage of socializing that by the end of your life will be so unmemorable that you’ll regret never having mastered or worked on something real and needed even if that thing wasn’t necessarily your passion.

If only I’d worked harder is a regret I intend to never have.

Hard Work is the Way to Happiness

Look at a day when you are supremely satisfied at the end. It’s not a day when you lounge around doing nothing; it’s when you’ve had everything to do, and you’ve done it. ~Margaret Thatcher

Happiness, I mean real happiness, not doing whatever you want because doing whatever you want gets old quickly and very meaningless, I’m talking the happiness that is knowing you’ve done something good and right with your time, a fulfilling feeling that you’ve done something of value, can only come through hard work, however, this isn’t the path to happiness that most people are presented with.

Ease, often the desired destination, is seen as not only where we want to end up but where we want to be in the present. But ease isn’t where happy people live, the hustle is where they reside, their pace faster than the unhappy, their retirement a dirt nap not an age pre-defined by their government.

The happiest old people I know never really retired, they’re still moving and working and communicating. Retirement, to them, is death. And so this idea that happiness and ease are one in the same is killing not only the ambition of otherwise ambitious people, but leading many to a life void of meaning and substance as work, pure work for the sake of work, isn’t praised so much as ease and a stagnant existence is desired.

Be different. See work for what it really is, living. Work is motion, it’s doing something and having something to show for what you’re doing. It’s creation. Work, whether you’re helping the poor or building a high rise with your own hands, is a large part of why we’re here and what we’re meant to do. So stop wishing you were somewhere else in someone else’s shoes and wear your shoes down to the bone with pure hard work and get the satisfaction that comes from labor.

If you want happiness, freedom, and most importantly meaning, work hard.