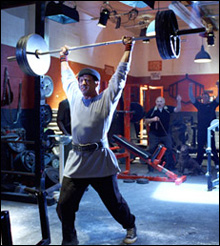 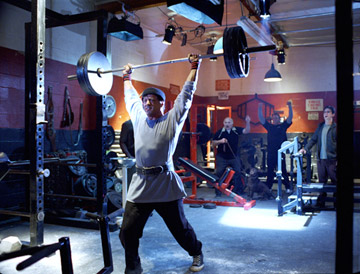 Thanks for the emails that you guys have been sending me. I’ve been getting some great questions that let me know specifically what goals you have and which solutions I can provide to help you reach those goals. So again, keep up with the comments on the blog and the emails, they really help!

Lately I’ve been getting a few emails a week from guys asking if it’s possible to build muscle and a better body while improving your athleticism at the same time, and if so how the hell do you do it?

Two Birds with One Stone

How can you improve your muscular endurance and power, while building muscle and losing fat? Don’t they kind of go against each other?

When I started boxing I needed power, but I needed it to not only be there in the first minute of the fight, but also the final seconds. I wasn’t just looking for one time power like a one-rep max, but power that lasted the whole fight, much like a one-rep max done multiple times in a workout amidst other exercises. I also needed muscle because I was so friggin’ tired of being skinny, but I needed to pack it into my fighting weight, which meant losing fat at the same time.

Everyone knows that the optimal method to build muscle is hypertrophy, or bodybuilding, and to lose fat you have to diet; while powerlifting is the best way to build power, running long distances increases endurance, and using plyometrics will help increase your vertical and improve your overall athleticism. But each of these training methods on their own only accomplishes one thing, two at best, and most people feel that you can’t focus multiple training methods at a time. But I needed to, so I figured out how to git‘er done.

Three things I did to build power and lean muscle while improving my muscular endurance:

1. I mixed in heavy lifting in my deadlifts, squats and Olympic lifts with drop sets or burnout sets of bodybuilding type exercises that were timed.

Here’s an example on video.

My power and explosiveness increased dramatically, not only because of the heavy weight I was lifting, but the multiple variations of Olympic lifts I incorporated into my training. I also began to fill out and add muscle which became a problem for boxing as I eventually grew out of my weight class – something that I had wanted to do since I was 16, so I had to run with it!

2. I didn’t focus just on rep count of each individual set, but the time of each set because I needed to increase my muscular endurance over an extended period of time – a round in a fight.

This meant I was getting the testosterone and HGH boost from the heavy lifts, while also getting the optimal ‘time under tension’ for hypertrophy so I could build muscle. People often forget that the more muscle you have the more calories you burn, so building muscle and losing fat should go hand in hand if you’re eating properly.

3. I continued to increase weight and the time of each set each week.

My progression was a two-headed monster as I needed both power and muscular endurance, I needed to add weight and increase the time of each set, or the time my muscles could last under tension. It wasn’t easy figuring out the best way to get this done. Combining the right exercises in a circuit helped, drop sets allowed me to lift heavy then decrease the weight while increasing the time of the set, supersets and burnout sets also allowed me to lift heavy with one exercise then longer with another.

It took a lot of trial an error but in the end I got it. I gained 32 pounds of lean muscle in 8 months with a 3 phase workout that helped me obviously build muscle, but also muscular endurance and power at the same time. I went for improving everything at once rather than one thing at a time.

Wouldn’t it be better to build lean muscle and improve your athleticism at the same time?

You can have your cake and eat it too… Is that how the saying goes?