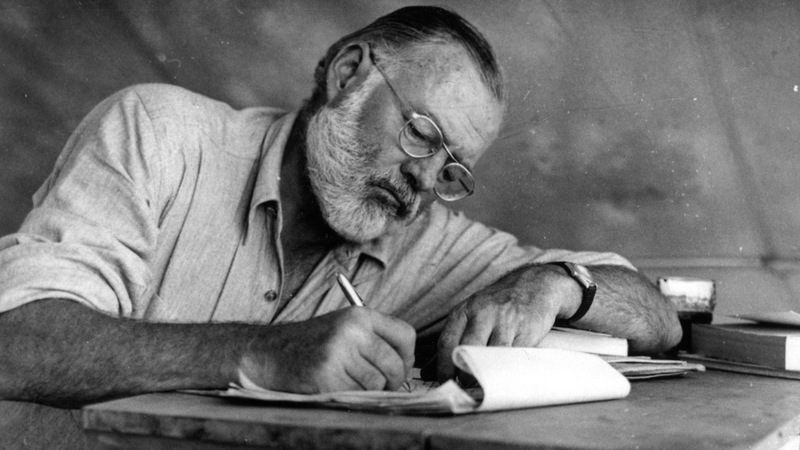 Jesus went off into the wilderness alone for forty days and forty nights to think, pray, face demons, and find strength; he found it. Da Vinci, from a young age, would wander off into the wilderness to learn to paint and draw, alone. He saw the value in solitude, the idea that to be great, to accomplish the most audacious ventures, solitude was a prerequisite. Hemingway saw the necessity for solitude in perfecting his craft. In his Nobel Prize acceptance speech he said the following:

Writing, at its best, is a lonely life. Organizations for writers palliate the writer’s loneliness but I doubt if they improve his writing. He grows in public stature as he sheds his loneliness and often his work deteriorates. For he does his work alone and if he is a good enough writer he must face eternity, or the lack of it, each day.

Milton would spend countless hours alone, driven by the Holy Spirit, writing his masterpiece. Napoleon, the great general and conquerer would spend hours with the love of his life: books. He’d study past battles creating a rolodex of readily accessible information that would eventually serve him better than maybe any other general in history on the battle field and in his rise to becoming Emperor of France.

It not only provides the spark but gives the ideas space to grow, evolve, take form. To be great, solitude must enter your life and never leave. As we become successful it becomes even more difficult to find such alone time, and as technologies continue to innovate at the hands of risk-taking and trail-blazing humans, the same effect occurs. Yet, no matter your definition of success, solitude must be a constant if progression is to take place. For it’s in solitude that our mission becomes clearer, our true voice becomes louder, our spirit is able to be tested and toughened without the crutch that companionship can provide.

“When I am, as it were, completely myself, entirely alone, and of good cheer – say, traveling in a carriage or walking after a good meal or during the night when I cannot sleep – it is on such occasions that my ideas flow best and most abundantly.” ~ Mozart

It’s something we may understand, this notion that when we’re alone we’re given a better opportunity to create more and become more, but it’s a truth that flies in the face of society’s increasingly distorted definition of happiness, a definition that is becoming linked with popularity.

We may have always seen happiness this way, but there’s no denying that it’s becoming worse as our lives are being played out in front of everyone on social media. It’s those that are constantly surrounded by people and friends and companions that we perceive as happy, as having more value in their lives. We even envy them for this popularity.

The number of friends on a Facebook profile has become an identification of status. The number of likes on a picture or wishes on a birthday are gaining importance and value. It makes sense, much of our joy in life comes while we’re in the company of others. We are, after-all, very social creatures.

Yes, humans are social creatures but not on the scale we’re seeing today. To have true meaning in our lives that comes from real connections and relationships we need fewer friends, not more. To accomplish something and feel as though we’re doing our part, playing our role, leaving our fingerprint, we need silence and solitude, we need to be alone.

History is filled with great men who saw its value, it’s necessity. In breaking free from society’s definitions and expectations and values, from this desire to be wanted and comforted and needed, by spending more time alone we are able to identify our true thoughts and intentions, we’re given a clear decision: focus and face our fears, or waste time.

So while everyone clammers for more, aim for less and fewer. Spend more time alone and less time in the social scene even if that scene is on the worldwide web. Find that thing you want to work toward and dedicate more time to it. If you’re stuck for ideas, don’t leave work and go for a drink, leave your office and go for a walk.

Everything becomes clearer in solitude and without it nothing of value is able to grow. It’s within solitude that the value of being alone has become a sort of a revelation in my own life. It’s while studying great men in history that I’ve found endless evidence for said revelation.

[Tweet ““Without great solitude no serious work is possible.” ~ Pablo”]

There is no to do list, no “top 10” at the end of this article to set you off on your path to prominence. Simply put, spend more time alone, working, reading, growing, evolving, becoming tougher, evolving into a badass who faces his fears alone, stoically and audaciously.

Spend more time with fewer friends. Give more of yourself to them. Drink with them, laugh with them, spark up a stogie with them, but just them. You don’t need to constantly be out and about and in the public eye. You don’t need to be seen, it’s a vain desire that places value in your life on the opinions of others, actually, on your perception of their opinion (see how useless it is?).

As you grow up you’ll see your social circle shrinking, and this is something you should actively pursue. Of course, your circle will also expand as you meet new, quality humans, ambitious like yourself, generous like yourself. So what of those who pull you down, who gossip, talk negatively, constantly talk about others instead of ideas?

Don’t sit them down and explain to them why you’re ridding them from your life. Don’t be so narcissistic to think that you’re of such great importance to require an audience, nor so stupid to think that you’ll change them. Just stop talking to them.

You may be able to comprehend this notion that as you face your fears alone you grow and evolve and develop grit. You may understand that it’s solitude that forces you to become tougher, that it’s in solitude where your creativity is unleashed, that it’s when you’re alone that your true ambitions reveal themselves, but to venture off into the world by bucking society’s desire for popularity in the name of something greater takes balls of brass.

To know is one thing, to do is an entirely different beast.

Have the courage to do. The arena of life can be a dangerous and violent place, it’s why most confine themselves to the life of a critic, a life in the stands spectating the great actions of those few who have had the courage to venture out on their own into the unknown. What I’ve presented to you in this article won’t be easy. There will be times of loneliness – these times are where you’ll be come tougher. There will be periods of great fear -it’s within these times that you’re given opportunity to evolve.

There’s a reason why so few are labeled great, why so few enter the arena; it’s tough. Your face will be marred by dust and sweat and blood, but there is no other path to greatness nor journey to a life of meaning that a man can take. So take courage, if you will. Do what must be done to live out your destiny.

Sandburg: “One of the greatest necessities in America is to discover creative solitude.”