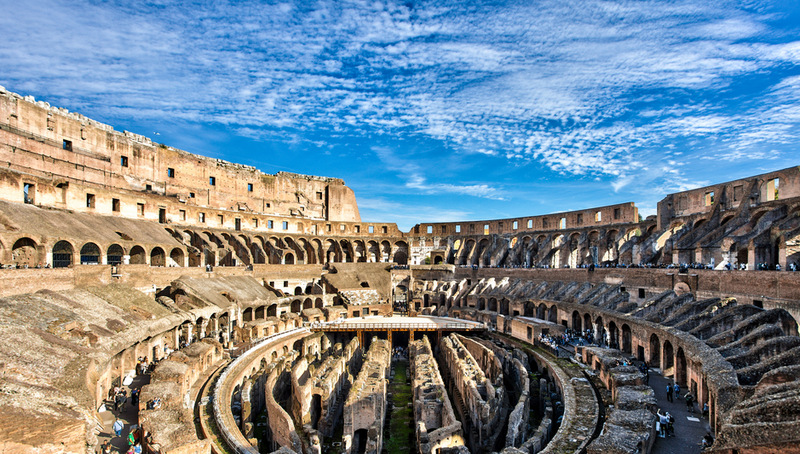 My mind was racing. I’d just stepped off the plane from England to Rome that, of course, began in Vancouver only a day before. Now, for the first time I was about to step beneath the columns that line Colosseum and into its heart. There wasn’t one singular thought in my head. I wasn’t just thinking about The Gladiator or The Man in The Arena or where I was standing, but all of them at once.

The words below echoed in my head. I felt like I could see Theodore Roosevelt standing in the middle of the arena belting his famous words, words that every man should memorize and strive to live by, while Maximus knelt down, picking up a handful of dirt from the floor of the Colosseum, preparing to either kill or die. Here I was enjoying the spectacle, letting my imagination have its way with my mind.

I was there, literally, in the arena, the most famous arena of all times; but I was also in the arena that TR spoke of; the arena of life, or at least moving closer to my version of it. It’d been a dream of mine to visit Italy ever since Moses wore short pants (Paulie Walnuts reference), and here I was, in Rome, the former center of the world and a place that still feels as if it is so.

What’s best is that this isn’t something I saved for, necessarily. I booked my flight on a whim, on points, but on a whim. I didn’t need to save for the trip because, again, I’m in the arena of life. A few years ago I started my own business, this business, and though I’ve seen my fair share of pits and valleys and dark days, I now have my freedom; I can work from anywhere. Sure, I have to work long hours, 7 days a week, but on that day that I booked my ticket I finally realized that it didn’t matter where I worked from. My business doesn’t come to a halt if I change locations, only if I stop hustling and grinding.

This is my arena, starting a business, taking that risk, putting my money into it and my time and effort and years of failures that are beginning to become successes. Is it your arena? Maybe, but maybe not. Your arena may be something different all-together, but you need to figure out what it is and dive into it head first.

Read this speech a few times to let it resonate:

It is not the critic who counts; not the man who points out how the strong man stumbles, or where the doer of deeds could have done them better. The credit belongs to the man who is actually in the arena, whose face is marred by dust and sweat and blood; who strives valiantly; who errs, who comes up short again and again, because there is no effort without error and shortcoming; but who does actually strive to do the deeds; who knows great enthusiasms, the great devotions; who spends himself in a worthy cause; who at the best knows in the end the triumph of high achievement, and who at the worst, if he fails, at least fails while daring greatly, so that his place shall never be with those cold and timid souls who neither know victory nor defeat.

Few of us will ever live. Few will take the risks they want to take deep down because after-all they’re risks and risk doesn’t always pan out as we dream it will; mine surely didn’t. I do, however, think that each of us has some idea of what life looks like to us. It’s not necessarily something we chase, like adventure or danger – both are awesome but they need meaning to mean something – but something that gives our lives a purpose and a meaning, something that’s bigger than mere survival, mediocrity, and monotony.

It takes balls to live, to venture into the woods and the world beyond your comfort zone and find that meaning that each of us crave, but it starts with something simple. Very simple.

Our society has become something of a distraction. We do anything and everything to distract ourselves from life’s bigger questions.

These can be depressing questions. Questions that make us sad. They make us feel as though we’re insignificant or lost, but they need to be asked if we’re going to live in the arena. A life of avoidance isn’t a life at all, but it’s what most of us do. When these questions are posed, usually by that inquisitive part of our brain or soul, we buy something, watch a movie, pick up a book, book a vacation. We do something that will distract us, even if it’s for a moment, so we don’t have to deal with these big issues that have been nagging at us ever since we began to truly question life’s meaning.

That’s what Rome has, in part, forced me to do. Nature has the same effect for me. When there’s nothing to distract us we’re forced to look deeper, dig deeper, and find answers.

Standing in the Colosseum I felt these big questions creeping up on me. When I started stepping into one of the many beautiful churches in Rome these questions grew stronger. But rather than avoid them, run from them, or distract myself with booze or buying or broads, I stayed with them, in them. I began looking inside my soul, trying to answer them.

You answers may be different than mine, you may find them in a different place. Much of the answers I’m finding to these big questions comes from the Good Book, the Bible. Yours may come from pure solitude or travel or adventure, or they may come when your first child is born or when you meet the woman of your dreams or when you find that singular thing you want to dedicate your life to.

But let them come.

Stop avoiding the big questions. Stand like a man, like a warrior, like Maximus and Roosevelt and find your answers. If you want to be in the arena of life, marred by dust and sweat and blood, doing what you’re here to do, what you’re made to do, being the man you’re capable of being, sit in silence, in a church or a forest or a Colosseum with a pen and a pad and start writing down your thoughts and answers and desires. Your life depends on it.