The longer I live, and the more people I meet, I realize that successful and happy people work harder than unhappy people. I’ve realized that they set bigger goals and take action on said goals while unhappy people are content to merely dream. I’ve also realized that it’s important that you’re real with yourself, who you are, your strengths and weaknesses, and that you follow your true dreams and goals, and not those of others in your circle, on tv, or on the billboard’s you pass every day on your way to work.

It’s kinda odd, today, how we meet people. You don’t have to run into someone, or be introduced to someone at a party or a gathering like you once did. You can simply have similar interests or be in the same industry and you’ll inevitably come into contact at some point over the interwebz.

That’s how I met Mike. He had a fitness site. I had one. He brought a different spin to his writing than most. As did I. And on one of my many trips to New York where we met up for a drink, he introduced me to a lovely bar, hidden underneath a hotel, that made a very delightful old fashion. If you bring me to a bar that makes a mean old fashion, I’ll consider you a friend. End of story. 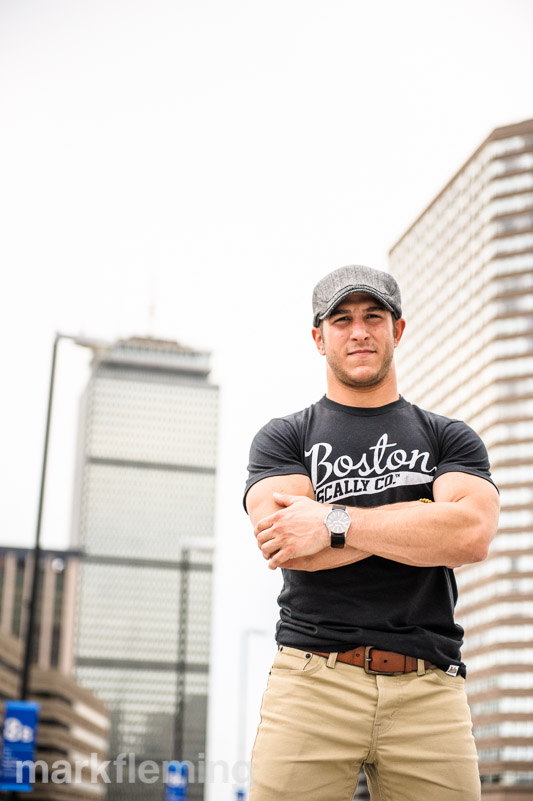 A couple weeks ago I asked Mike to write a blog post about one of his new ventures. It’s awesome. I’m excited about it, and I’m excited for him. And so, I wanted him to tell us how he set out to chase his dreams, tackle a massive goal, and bring a vision and an idea to fruition.

Take it away, Mike.

How to Chase Your Dreams, Take Big Actions, and Grab Life By the Balls

Chad contacted me and asked if I would write a blog post for the site as we have often shared ideas and supported each other over the past couples of years with our respective fitness websites.

I have written for many sites, publications and am always striving to absorb as much information about health, fitness, nutrition and overall well-being. My newest venture is starting a cap and apparel line called Boston Scally Company. It has been a dream that I have been passionate about pursuing for years.

Throughout this process I realized that there was a very specific way that guys like Chad, myself and readers like YOU take toward pursuing a dream or reaching a goal—and I have always been curious as to why we take this approach.

It stems from somewhere—it has to. Maybe you had a mentor growing up, certain family-values or grew up in a specific environment.

In 2007, I moved from Boston to New York City in pursuit of a dream. I made sure there was something that I always brought with me no matter what…

It was then that I realized—I wanted to not only pursue my dreams, but understand what inspired me to do so. It was pretty simple for me—I grew up in Boston. This was where and how the make up of my culture, personality, attitude and perspective on life stemmed from.

I have always been extremely proud of this, because it inspired me.

Where does your inspiration stem from?

Just a Bunch of Blue-Collar Wiseguys

Boston is known for being a blue-collar city where hard work is a given, the bond of brotherhood is unbreakable and the pursuit, no matter what it’s toward, is always relentless.

There is a certain vibe in Boston that starts with its’ people, their sarcasm, their underlying rugged persona…and the one-of-a-kind culture they all embrace.

In the 1920s leading into the 1930s—times were tough in America. Many communities consisted of second generation to those that immigrated from all over the world to find a better life for their families, provide for their children…to scrap for an opportunity at the ‘American Dream.’

You’d often see working class men leading up until this time and throughout, wearing ‘flat caps,’ or as we refer to them in Boston—‘scally caps.’ The design of this cap was most likely for functional purposes such as blocking out sun or providing more shade, but quickly redefined itself. As immigrants began settling in the United States, the ‘scally’ cap became a staple in American fashion—especially in Boston.

Not Just a Boston Thing

But beyond my beloved city, there are people just like me in other amazing cities or towns that truly appreciate where they came from and how it molded them. They understand that sometimes pursuing a dream takes hard work, grit…and a little charm.

This is where it all stems from.

Maybe there’s been a time where you figuratively and literally needed to fight in order to achieve a dream.

Maybe there was a time when you failed, but then made the choice to pick yourself up by your fucking bootstraps and bloody a few lips to make sure that it never happened again.

Or maybe you picked someone else up out of the dirt to sacrifice your own dream to help them achieve theirs.

This is the mentality and the soul of what, I feel, makes good people great.

And that is what Boston Scally Company is all about.

We aim to give those, not only from Boston, the opportunity to own a quality cap or shirt that represents our blue-collar mentality and the culture behind it. If you understand the tough, humble and loveable nature of those “blue-collar wiseguys” then you will understand Boston Scally Company.

If you get inspired by the pursuit of a dream and breaking through the barriers along the way, just like many of our ancestors did—then you will understand Boston Scally Company. And, to me, there is no better way to share this with others than in the form of Boston’s most culture-defining piece of headwear—the ‘scally’ cap.