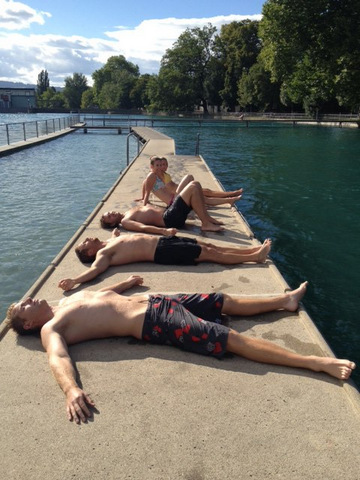 “When I look back on all these worries, I remember the story of the old man who said on his deathbed that he had had a lot of trouble in his life, most of which had never happened.” ~ Winston Churchill

Worry can take down any dream. It can diminish the greatest man into a shriveled, unconfident shell of who he should be. Worry clouds our thoughts, blurs our focus, and darkens our view of reality. Worry turns a moment of crisis into extended hardship.

There is no point to worry. There’s obviously no benefit, but when we worry we guarantee our worst fears will come true, and then some. 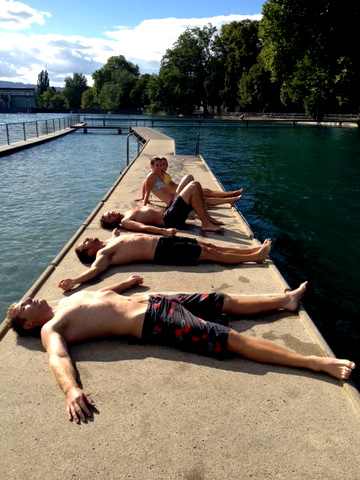 Barely awake on a train from Berne to Zurich. The beautiful farmland, with the odd castle in the distance, keep my eyes as alert as possible, as I try not to miss a last glance at the beautiful Swiss countryside. I’m in the moment, and what a beautiful moment it is.

I could focus on the fact that I’m running late for my flight back to Vancouver. I have no control over that now, though. I’m on the train that will eventually get me there, the only thing left to do is to enjoy where I am. And I’m half way across the world in one of the most beautiful countries I’ve visited. To complain would be blasphemy.

The past week has been amazing. I’m visiting Switzerland to be a part of one of my best friend’s wedding. A couple days in Berne, followed by a few others in the countryside. I visited a castle. Swam down every river I could. Jumped off bridges, ate, sang, and danced until I could eat, sing, and dance no more. I saw my buddy embark on an entirely new chapter in his life. I stood atop the highest peak in Europe. Swam in glacier water, drank beer, and stood in the streets of Zurich, absorbing the beauty, the history, and the culture that I will return to again in the future.

It was a great trip.

Now, on the train pulling up to the airport, the bliss of the previous week will be contrasted with stress and failure.

I arrive to the airport with 45 minutes to spare. Enough time considering the first leg of my trip is a brief, 45-minute flight to Frankfurt. However, due to a ticket that says one thing but means another, an airline with no help desk, and a woman who seemed to despise helping traveler’s in a rush, I missed my flight. Not only did I miss my flight, but the airline wouldn’t let me go on standby, or buy another ticket at a reduced rate on a flight that was almost empty to Frankfurt, so I could make the next leg of my trip to Vancouver.

The events that occurred while I was in the Zurich airport were some of the most frustrating I’d ever experienced. I was helped by willing people who had no clue what they were doing, and turned away by those who knew what I had to do, but refused to spend the 10 minutes to explain it to me. The blame, on my shoulders and mine along. The lack of preparation is my fault. Missing the flight: my fault.

So, there I sat. Eyes glazed over faced with the decision of buying a $1000 ticket to Frankfurt (45 minute flight) and try to make the connecting flight – one that I should make, but might not be allowed to fly on because Condor wouldn’t acknowledge me once I missed that first flight. You miss the first, you’re taken off the flight list, I was told by the man on the phone I’d spoken with earlier. Or, I buy a whole new ticket, stay a few extra days, but break a promise of attending to some things back in Vancouver that I’d promised I’d attend weeks earlier.

There was no, I want this, decision. The first was a risk. The second sucked – depending on how you look at it. There were two choices. There were also two ways to look at it: one of worry, and one of acceptance and productivity.

As I sat there thinking, digging myself into a hole with my own thoughts. Adding weight to my shoulders. Thinking about all the bad that has happened, I had a moment of clarity: the worst that would happen was I spent way too much money and got home on time, or I spent even more money, missed out on the stuff I had to be back for, but got to spend an extra day in Zurich, and another in Dusseldorf. 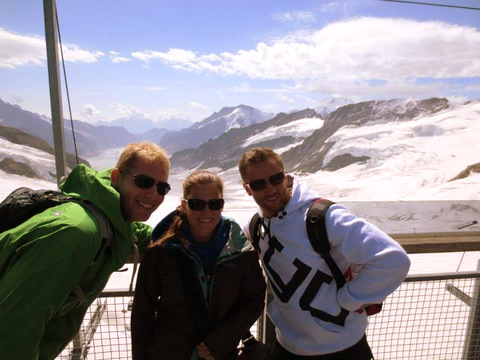 Sitting in the airport, the stress of the past hour still running through my mind, making me tired, nauseous, and wanting nothing more to just go home, I refused to worry. I refused to complain – when I think of it now there’s nothing to complain about. And I refused not to smile. Try smiling, you might look like an idiot, but you’ll feel great regardless of what’s going on around you.

“Drag your thoughts away from your troubles… by the ears, by the heels, or any other way you can manage it.” ~ Mark Twain

All of a sudden the stress went away. My thoughts became clearer. A smile was even brought to my face. No grudge held against the old hag who wouldn’t help me. What’s done is done. Now move on. And move on is exactly what I did.

We’ve all had many moments in life where the shit has hit the fan. My site has been overloaded with visitors and has shut down at some of its most important moments. I’ve missed flights, lost money, made bad decisions in life, in business, with my finances. I lost loved ones that I depended on, ruined relationships, had family crises, lost fights, had to stop dreams and focus on others. All moments that seemed terrible in the moment, but have resulted in good, more to a positive outlook than any event following. 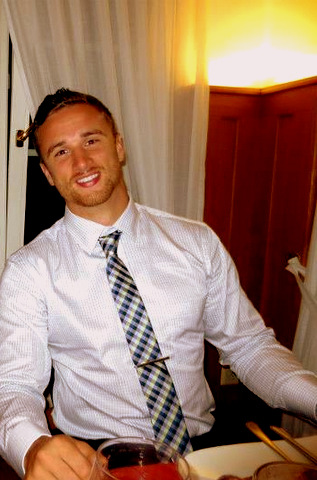 I’ve had basketball games in high school and college where I put so much pressure on myself to perform, that I choked. I didn’t play as good as I could have because I worried about the consequences of not playing well. I lost a fight because of worry. Lost moments of beauty in life because my mind was elsewhere.

No matter how dark a place may seem. No matter how bad things get, they’re never as bad as we think they are. There’s also beauty in all of these moments where we can learn, grow and become stronger.

What each of these moments have taught me, is that there’s no sense in worrying about the future, past, or present. There is sense in being in the moment, and doing my utmost to ensure my success in the future. To worry about the future, however, is not only pointless, but destructive.

Missing a plane in Zurich doesn’t seem like the worst thing in the world, but when you’re in the midst of a day when everything seems to be going wrong, and to top it off, you’re not going to get home for something you promised you would – and to you, a promise is something etched in stone, something you don’t break – you have the option to think about the negative. To worry about all the wrong that will come of this mistake.

Or we can bring ourselves back down to reality. Weight the positives, negatives, and start working to create a positive outcome. We can live. Create something good out of a stressful situation.

How to Win When The Shit Hits The Fan

The shit hits the fan. Think about the saying. I hate to be graphic, but it’s poop hitting a fan then being splatted everywhere. When something goes wrong in our lives, we expand the problem by worrying about its consequences.

Shit hitting the fan is the perfect cliched statement to accompany an article concerning worry, and how to deal with bad moments. Moments… That’s all they are, remember. Even if our lives are in despair. If our jobs are an endless road of shite passed down to us, worrying about our future is useless.

When we’re in a moment like the one I described above, there are a few things we can do:

1. What’s the worst that can happen if I can’t solve my problem?

2. Prepare yourself mentally to accept the worst – if necessary.

3. Then calmly try to improve upon the worst – which you have already mentally agreed to accept. 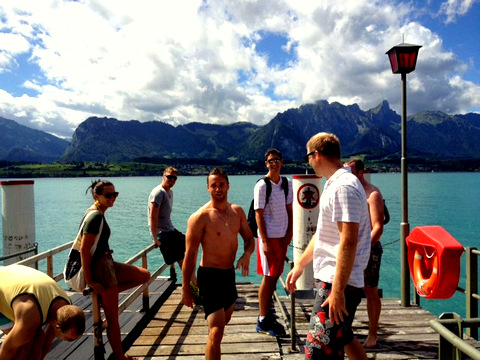 Worrying About the Future

I used to worry about my future daily. I had big dreams. Lofty beyond the most ambitious guy my age, which isn’t such a bad thing – it isn’t bad at all – but the pressure I’d place on myself was destructive. It meant (still means) so much to me, that failure was groundbreaking.

The future is something that most of us worry about. It can be scary. The idea that we could fail. That we could lose more than just our money, but our self respect, way of life, and even those who claim they support us today, is scary as shit. But so what?

The more we worry, the less we do. The less productive we are, the less happiness we have in our lives, and the less we live. Worry makes our worst fears reality, and then compounds them tenfold. The health benefits are innumerable. Worry can lean to heart disease, paralysis through arthritis, and ulcers. The list could go on and on, but I’d like to wrap things up soon. To put it short, worry not only ruins our quality of life, but it can end our life.

“Anyone can carry his burden, however hard, until nightfall. Anyone can do his work, however hard, for one day. Anyone can live sweetly, patiently, lovingly, purely, till the sun goes down. And this is all that life really means.” ~ Robert Louis Stevenson

Nothing exists but today.

Yesterday has gone, and our ability to effect it has gone as well, so why worry about it?

I listen to the Tim McGraw song Better Than I Used to Be a few times a week. I make mistakes, like you make mistakes, and we’ll all continue to make mistakes. But we’re better than we used to be. We, as men who continually strive to create something better than where we are, yet appreciate and love who we are and the life we have, are always moving forward.

If we’re taking steps forward, why worry about the one’s we’ve left behind?

Life, real life, exists only in the present. It isn’t in the future, nor in the past. As we start another day – or are in the midst of one – be in it. If everything around you is falling, failing, and foreclosing, stand firm. Enjoy where you are. Don’t let worry destroy your body, your mind, or your life.

Life, we learn to late, is in the living, in the tissue of very day and hour. ~ Stephen Leacock