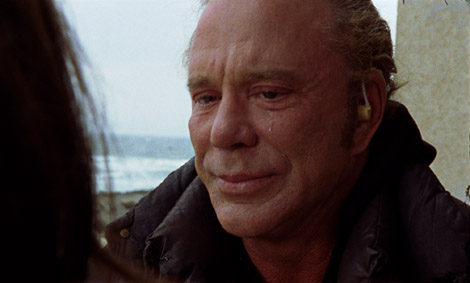 The Wrestler – great movie. A raw movie about a guy who keeps can’t catch a break – starring Mickey Rourke.

“…Now if you know what you’re worth then go out and get what you worth. But you gotta be willing to take the hits. And not pointing fingers saying you ain’t where you wanna be because of him, or her, or anybody. Cowards do that and that ain’t you! You’re better than that!” ~ Rocky Balboa

The World Ain’t all Sunshine and Rainbows

Life isn’t a Mommy, holding our hands through the tough times, making excuses for us if we lose, comforting us when things are tough and the future seems bleak. Life knocks you down, and keeps you down unless you get up. It’ll knock you down again and again, but you continually have to stand up and fight.

If you think it’s too hard and you just want to stay down – then you’ve lost. You’ll live an average life, a life filled with regret, where you’re constantly pointing the finger at others, placing the blame elsewhere, making excuses for yourself instead of making things happen for yourself.

You’ll look at a guy with a good life – whatever your definition of that may be – and ask yourself “why can’t my life be like this? Why can’t I have what he has? He probably got it given to him, that lucky bastard.” I can’t count how many time’s I’ve heard that, and I’m embarrassed to say, I’ve even said and thought that myself at some point. The grass is always greener on the other side of the fence until you’ve earned something, and until you’ve achieved something because you truly deserve it and have worked for it.

If you give up, or take the easy way out, you’ll always be looking at the other side of the fence, wishing you were there instead of here: in your own wonderful life that has everything anyone could ever want – but, obviously not everything you could ever want.

The World is a Shallow Place

When I was a skinny twerp I was looked at a lot differently than I am now. Today, people just assume that I take care of myself, that I have a certain amount of pride in how I look and so forth. Which is true. It’s not that I didn’t back then, I just had nothing to show for it – I didn’t look like I did.

People made assumptions about my personality, and about who I was even though they didn’t know me. Some saw weakness – which is probably why I used to get in a few fights back in the day, I was always trying to prove myself – plus I liked a good scrap. 🙂

That being said, these days I can receive the opposite judgement: that all I care about is working out, that I live, eat, and breath the inside of a weight room, or that I might not be the sharpest knife in the drawer so-to-speak – all braun no brains. No matter where you’re at in life, what you look like, what you have etc… people are always going to judge you – more often than not out of their own insecurities – and you just have to accept that. You can use it as motivation and rise up, or let it keep you down.

Now, there’s a big difference between me back then and me now. When I was a toothpick, I wasn’t happy with where I was. So I worked my ass off to make a change. Today, I’m happy with where I am at, but it doesn’t mean that the judgements stop – nor does it mean that I’m anywhere close to being satisfied with who I am or where I’m at in life. But I’m not constantly trying to improve the body that I was unconfident in, that’s done – now it’s onto other things. It truly never ends.

We’re continually evolving. I wouldn’t call it changing, you still want to remain that same good guy you are at the core, you want to keep your roots, but you’re evolving him, making him even better and challenging him more and more everyday to reach his true potential.

If you’re fine with the body you have – whether skinny or bigger – or the kind of person you are, or where you are, or whatever. Then cool, take that stuff with a grain of salt. But if you want more, then “know what you’re worth, and go out and get what you’re worth.” It’s under your control. Don’t get stuck feeling sorry for yourself – it’ll get you nowhere.

There’s two ways you can handle the crap life throws at you:

1. You can start making excuses.

You can look at other people and think, “oh well, they’ve just got better genetics than me.” Probably true, doesn’t make it a good enough excuse.

You can think, “well he’s had a head start in life. He was born with more than me – or he was born with a better family, in a better place, he started before me and so on…” Some of it might be true, doesn’t make it a good enough excuse to lay down and quit, or give just 80% of your maximal effort.

2. You can accept reality, and make a change if you so choose.

I wasn’t happy weighing under 150 pounds. I felt like my body didn’t convey the kind of person that I was; I was confident, just not in how I looked. I wanted a change, you may not, but if you do, the first thing you have to do is accept that it’s 100% under your control.

I worked my ass off for 7 years. I trained 6 days a week for at least an hour everyday – which was way too often. But I was stuck with these shitty genetics and I thought about giving up. Then I lucked out and got my break when I was hired as a trainer – of all things – at a gym, where I met my mentor who helped me turn things around.

But if I had failed for 6 years and then quit, or even 5 years, I probably would’ve just kept that body for the rest of my life.

It’s not going to be handed to you.