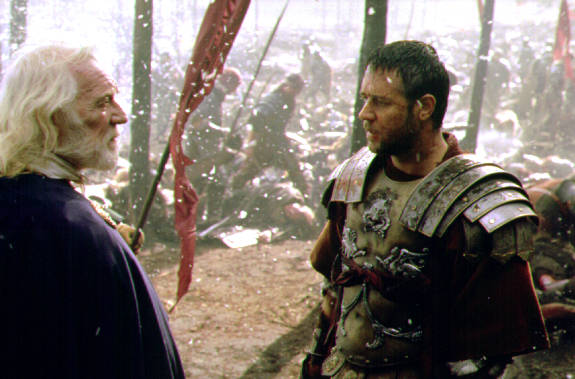 Russel Crow in the Gladiator

Lately I’ve seen a few of these lists around, and I figured I’d give my two cents on the subject as well.

For starters, what is a man?

Being a man is not so much about things you do, or how you look, but who you are, and how you handle adversity. A man might be reluctant to stand up and fight against injustice, but when he makes the decision to do so, he does it with everything he has. A man also gets up after he’s been knocked down, and has an understanding about what is truly important in life – things like family, friends, and living by a set of values and with honor.

A man is far from perfect, and he knows it, but that doesn’t mean that he doesn’t strive for perfection on a daily basis. When he makes mistakes, he owns up to them.

In order to be a movie about ‘being a man’ there has to exist some conflict and hardship, a struggle, and in most cases a triumph. There has to be a sense of the harsh reality that is life – it isn’t always sunshine and rainbows – and there has to be evolution in the character  of the protagonist – we have to see what he’s really made of.

In building this list I realize that there are more cases of “reluctant heroes” than there are of guys who set out to be heroic. They are just average guys who want to live a good life, but are faced with tragedy and setbacks and have to make a choice: struggle forward, or quit.

5 movies about being a man

The man has everything, greatness in the ring, money, a beautiful family, and then loses everything because of injury, and the Great Depression – two things he had absolutely no control over. But he refuses to quit, and he never stops providing for his family.

James J. Braddock defines what it is to be a man. He fights bums with a broken arm for a few bucks at dead-end shows, he works on the docks, even sucks up his pride and receives a handout from the government – and handout that he eventually pays back when things turn around.

No matter how dark things get, he never stops moving, and he never loses hope.

Godfather I is a look at Michael Corleone (Al Pacino) and his introduction into manhood when he’s forced into the family business. He goes from a wide-eyed young military man, to a cold and calculative mob boss. Neither movie is in any way inspiring, but both show great parallels between boyhood and manhood.

Godfather II takes a look at Vito Corleone’s (Robert DeNiro) maturation from a young boy in Italy who’s father, brother, and mother are killed by the local mob boss. He flees to New York and works his way up in the streets to become the Godfather – the boss of bosses in New York’s Mafia.

This film has one of the greatest speeches about being a man I’ve ever heard – and it doesn’t get enough credit for it. Maybe it’s because Stallone made it in his 60’s and it was viewed as ‘just another Rocky movie’ after the disappointment that was Rocky 5. But there are some great lines in this movie. Combine it with Rocky I, II, III, and IV – and you have a great lesson on what it means to be a man.

I shouldn’t even be numbering these. I mean, how do you put Braveheart and Gladiator at number’s 4 and 5?

Tragedy often breeds greatness. It gives us a reason to fight and the passion needed to succeed in the cause we’re fighting for. William Wallace lost his family to the English, and then his wife. Not only did he stand up and fight with tenacity and power, but with intelligence as well.

Another commonality amongst each of these movies is that each of the protagonists aren’t just brave, strong, and honorable, but smart as well. They’re intelligent people who use every talent they’re given to serve a purpose greater than themselves.

Easily one of my favorite movies of all time.

Again, about a man who is at the height of his career as a general in the Roman army, only to have everything taken from him. Much of the movie is about revenge, and I guess that’s not a great motive to have as a driving force in life, but in this case I think it’s a great one.

Ridding the world of a scum bag ruler – fine by me!

What’s your #1 movie about being a man?