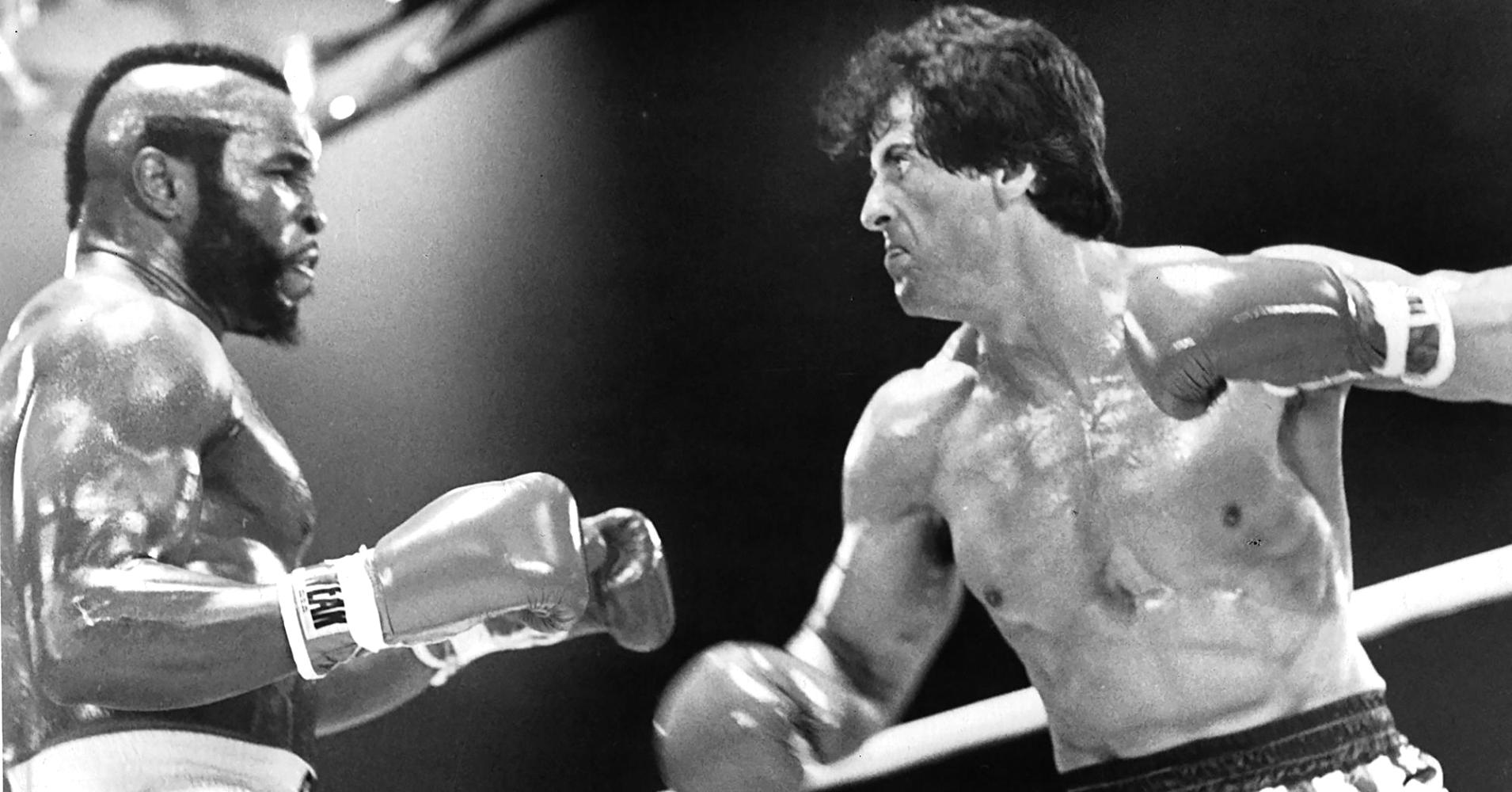 The Stoics practiced death. They’d train themselves to be in that moment when their lives end. They’d practice sorrow and pain and prepare for those things that will one day inevitably be so their lives won’t be crushed by the emotions we so often give to tragedies. The lesson, essentially, is that there is no tomorrow. There is no day that you can push what must be done now to. There is no better time than the present to become who you want to become and live the life you want to live.

You just have to man up and take action. 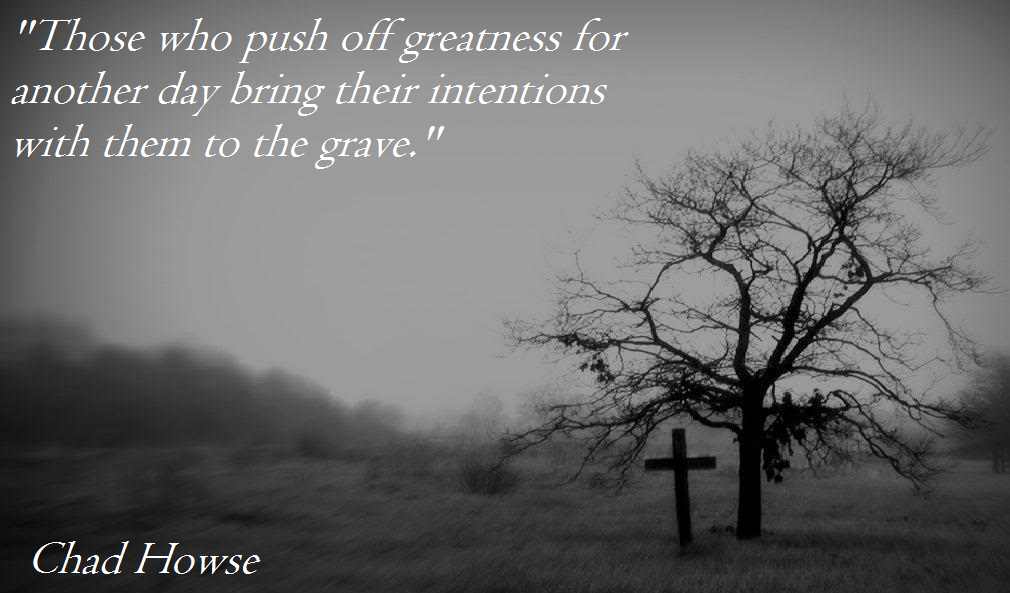 Those who push off greatness for another day bring their intentions with them to the grave.

“Tomorrow” is the favorite word of those content with average. They embrace tomorrow. They push greatness to another day. Work further off to yet another.

Tomorrow’s, however, are brought with you to the grave in the place of the life you could have led. (Read This: If You Die Tomorrow…) 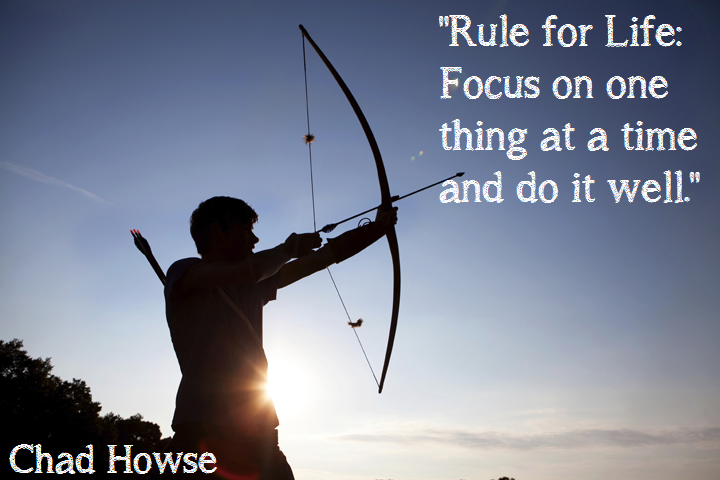 Rule for Life: Focus on one thing at a time and do it well.

If all you do is focus on one thing at a time, whether at work or at play, you will have a happy and successful life.

It’s with innovation and technology that this has become something other than the norm. We spend our days “doing things” while trying to focus on 5 things at once.

Shut everything down and focus only on one thing and you’ll already be ahead of the pack. 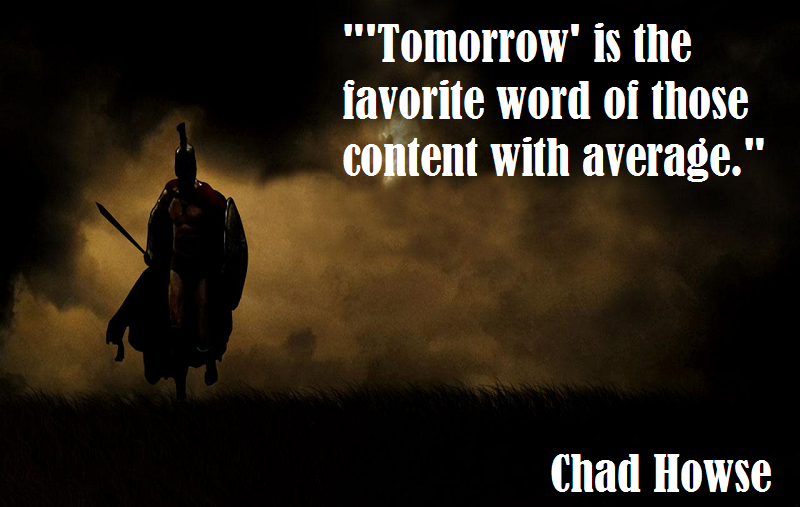 “Tomorrow” is the favorite word of those content with average.

We resist who we can become when we push him to tomorrow.

When we say “I’m going to do this…” but don’t actually do it, we get used to feeling accomplishment without actually accomplishing anything.

Stop saying what you’re going to do tomorrow and do it today. Please, just start! 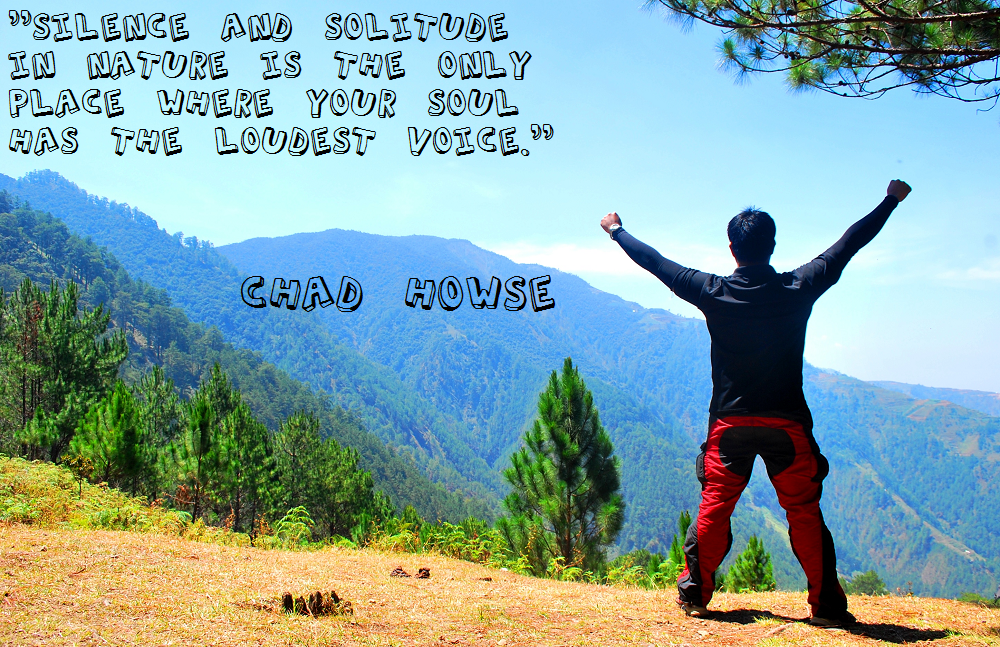 Silence and solitude in nature is the only place where your soul has the loudest voice.

We find it very hard to “know ourselves”, to know our intentions, our true wants and desires. And it makes sense. We spend the vast majority of our time influenced by others.

We’re surrounded by the words of others, whether on TV or billboards or amongst friends.

It’s only in solitude and silence way out in the woods, in God’s country, that your spirit, your true voice is heard. Get out there into the wild, find adventure and listen to that strong, warrior’s voice that’s calling you to be more, do more, live daring. 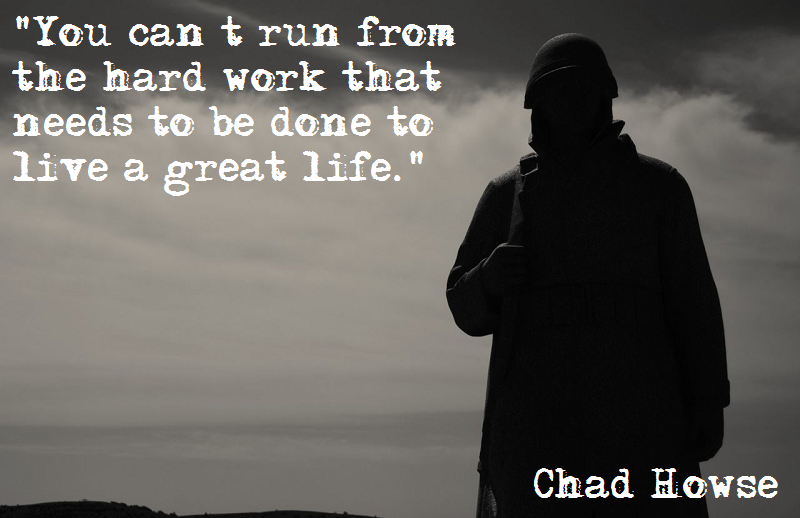 You can’t run from the hard work that needs to be done to live a great life.

It doesn’t matter what you want to do in life, avoiding hard work will get you nothing. Actually, it will leave you a cynical, envious fool, waiting for a hand-out rather than starting your own climb out of despair.

You will feel entitled, after a while, if you don’t work hard.

You’ll see others accomplishing and wonder what they’re doing that you’re not. You’ll think that success is some sort of “trick”. That those who are successful must have cheated to get there.

This is at the root of those who want to tax the successful a greater percentage than those less fortunate. Even terms like “less fortunate” deem those who’ve hustled as “lucky”. 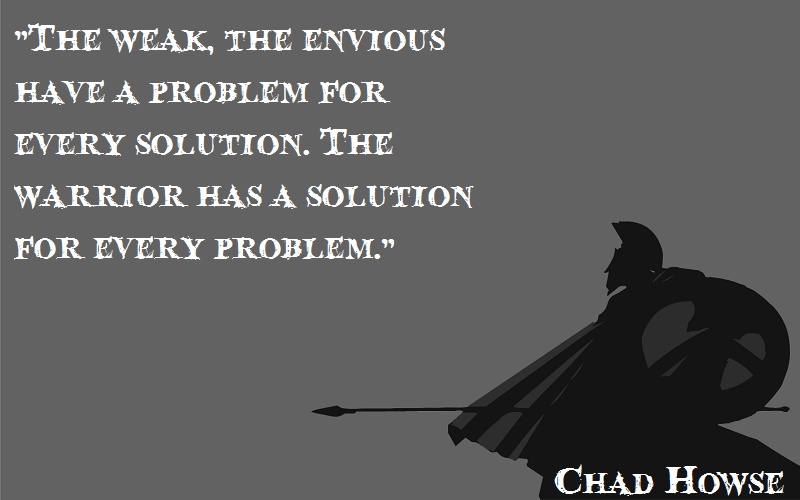 The weak, the envious have a problem for every solution. The warrior has a solution for every problem. (Read This: The Tale of The Warrior And The Coward)

You talk with most people and their conversations move quickly to complaints. You provide a solution, and their response is inevitably, “ya, but…”

Spend no time with these people. Don’t give them an ounce of your breath, nor a second of your time. Surround yourself with winners, warriors, champions if that’s who you want to be and be remembered as. 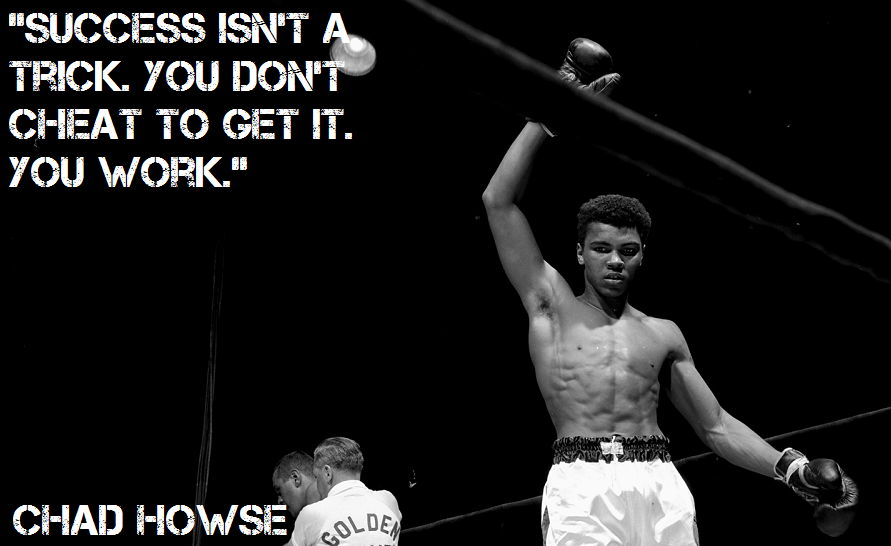 There’s a growing sentiment that success is in somehow given to people as a gift, or, if not, that they cheat in some way to get it.

You hear it in conversations at parties or from the mouths of politicians. The next logical thing to do is to tax the successful at a higher rate to punish them for having cheated while the rest of us play by the rules.

Those who ARE successful, however, came to the conclusion very either, maybe through failure or victory or good parenting, that success is earned. It’s that simple.

While everyone else follows, the successful break free from the “rules” that bind the masses and simply work harder, longer, and more intelligent hours. 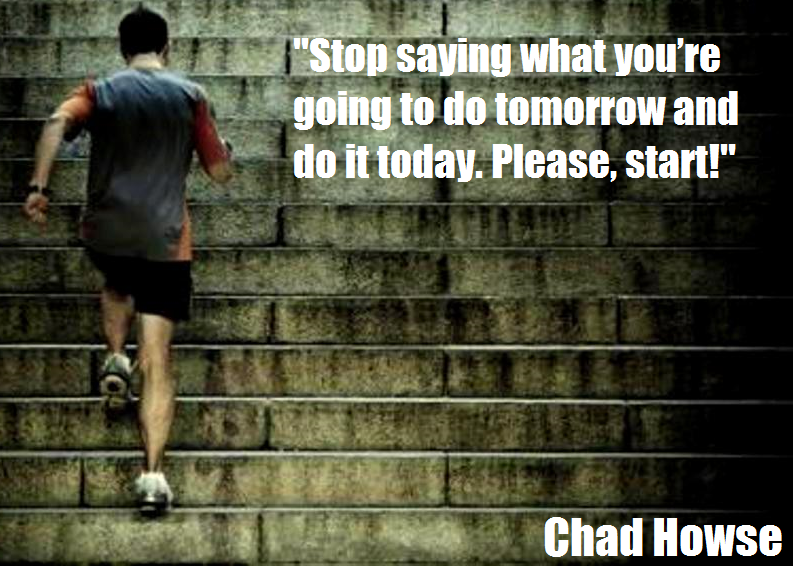 Stop saying what you’re going to do tomorrow and do it today. Please, start!

There are no valid reasons nor excuses to put things off.

All of the evidence put forth should require of you action, not more planning or thought or intention, but action. 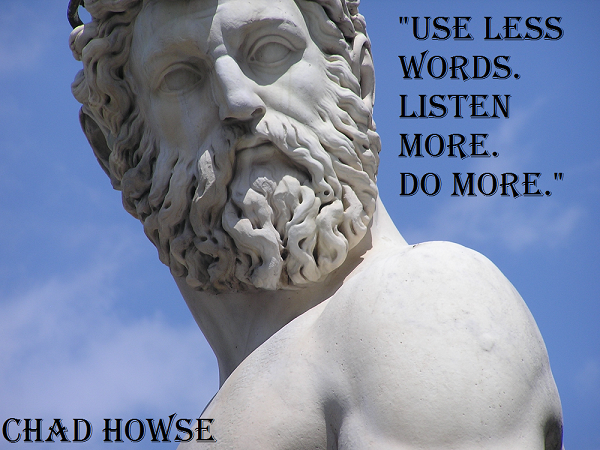 We are not a listening society. Yet, the smartest people I know are the best listeners. You see them tuning into what you’re saying and processing it before coming back with a response. 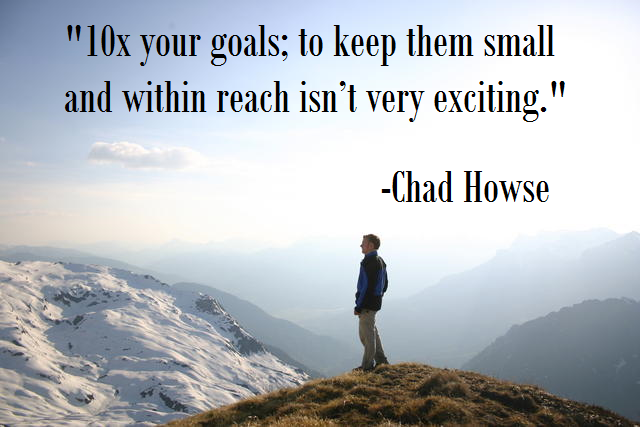 10x your goals; to keep them small and within reach isn’t very exciting.

Don’t aim for average, because you will get it. Aim for greatness, it’s much more exciting. Sure it costs more in effort and sacrifice, but you’re not a pussy, get after it.

Think bigger, better, and brighter. And then have the balls to take action and get after it. 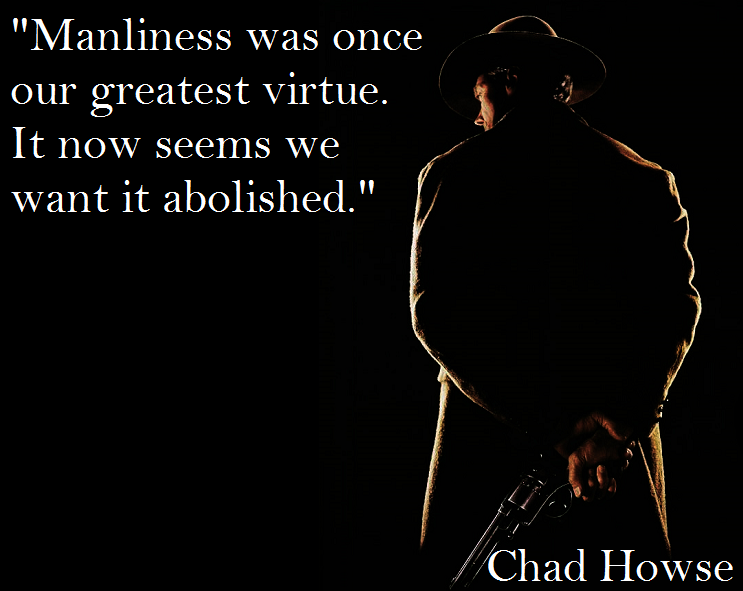 Manliness was once our greatest virtue. It now seems we want it abolished.

Blurb
What’s of men and for men can, seemingly, no longer be purely masculine. Read any history book or any biography of a great man in history and you’ll read about a virtue called manliness.

It was in the daily vernacular. Gandhi spoke of it, as did Churchill. As does the Bible, and so did Robert E. Lee. Lincoln spoke of it along with Mailer and Aurelius and Seneca.

Confucius had words of wisdom on the manly virtue, as did Theodore Roosevelt.

Manliness was once praised. Have we grown so sensitive that we cannot praise one energy without hurting the feelings of another?

More Man Up Monday: How to Learn Greatness