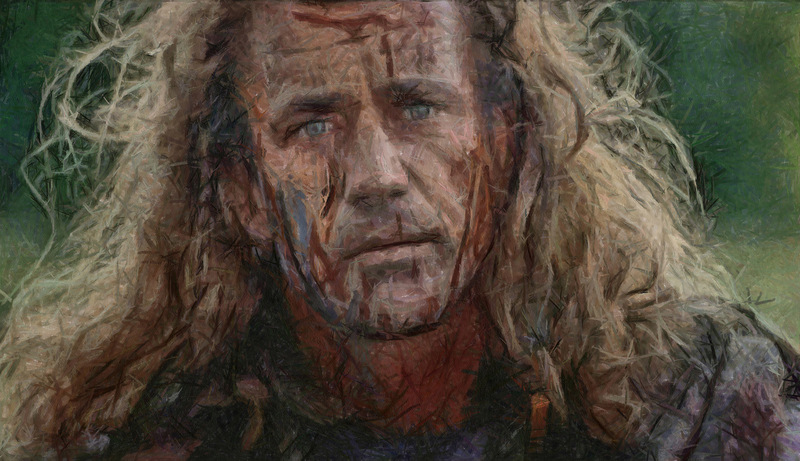 I am William Wallace, or at least I’m in his mind as I walk up the steep hill on the way to the monument that’s erected in his honor. I close my eyes, for a moment, to bring myself back to a time when freedom was something men were willing to die for and tyranny not something we blindly and willingly accept as we do in today’s docile society.

My heart starts to beat nervously as I picture the battle. The enemy standing thousands stronger than my forces, with my death promising to be a brutal spectacle if I continue to fight for something that I’m willing to suffer and die for. I feel the dirt in my fingers, my hair draped on my shoulders, and my purpose so strong in my soul.

It’s a different time, Wallace’s days, a time that bread warriors out of necessity. Death was a constant reality. We would have seen men die as young lads, learning to accept death as a reality as a consequence of such experiences, and a powerful, vivid reason to appreciate life. We would have appreciated the harshness of the world and would not have grown up in ignorance of this fact, as many do today, it would have been impossible to do so and still survive, grow strong, and thrive. And we would have grown strong…

Not just of body, but of spirit, for in times where the dangers of the world were more physical and death more immediate, the strong would be the only ones who could make a difference and lead. Strong men don’t follow cowards or weak men. Sure, the cunning could earn money, the devious could scheme their way to riches, and the spineless could slither their way through life, but they wouldn’t have mattered, their purpose of personal gain wouldn’t be one that would attract the strong men that existed to follow them, especially into battle.

To kill another man we’d have to get within their reach, bringing our death into a very likely possibility if we were willing to take the risk necessary to kill them. We couldn’t push a button from an ivory tower nor pull a trigger, killing took courage, living took courage.

Yea, the men were cut from a different cloth not because they were different men or had different souls or more innate testicular fortitude, but because the times required it of them.

Still walking up the steep hill, me arse hurting more and more with every step because of the incline, thoughts begin to run through my head. Thoughts of violence and survival and freedom. Visions of battle and fear and life. I can see Wallace and his men running through the forest, killing those who’d done them wrong, killing those who’d held their freedom far from their grasp. I think of our society, a society that often rightly caters aids the weak as every man should live to do, but also a society that develops more weak “men” and more cowards and more self-entitled scumbags who want what they don’t deserve and would never have the balls to fight for what they claim they want so very bad.

I get pissed off, riled up, and angered when I think of what men like Wallace fought for, and were willing to die for, then think about what we’re not willing to work for or live for or sacrifice for, we just want, want, want. Cowards always existed, and I’ve been a coward before, we all have at some point in our lives, but our society breeds them, it doesn’t breed warriors.

We live our lives like our days here are unlimited.

With death being less and less frequent, and violence being more scarce, we can afford to take our days for granted. We’re likely going to live to see plenty of them, and though that’s not always true, it’s becoming more and more true with each generation. As our advances find more cures and the consequences for our actions become less personal and less violent, death is ripped from our society and along with it so is life.

In today’s self-entitled society that has to work for less and fight for little, a society that can complain and if the numbers are great enough their complaints are heard no matter how worthy they may be, I’m not sure if I could find a man willing to have his limbs ripped from his torso so his countrymen could one day be free. The truth is, none of us are truly free and we don’t give rats ass about it because we’re completely ignorant of what freedom is.

We don’t truly own our own land, nor do we own our homes or our cars or our futures. Our freedom is a guise. We’re given a little, enough to keep us happy so we don’t revolt or even realize that we’re being ruled with an iron fist not unlike that of King Edward I who had Wallace hanged for fighting for what should have been his all along, his freedom. We’re not free at all.

We’re forced to pay taxes for things we don’t need nor want. We can’t do with our land what we’d like to do with our land. We can’t defend our homes, our kids, our wives like men should. Order is a blessing, but too much of anything becomes detrimental to the individual.

We don’t treat people with respect because the consequences for disrespect aren’t violent.

Men are born to defend. By removing violence from our society all-together, we’re removing the consequences that will truly deter a scumbag from being a scumbag.

Cowards don’t like physical pain, they’d much rather work the system or trick a judge or a cop than stand and fight. The parallels to the harsh world Wallace grew up in, a world that forged a man that men will admire until men are no longer on this planet, and the one we live in are stark. They’re opposites. With all the advances we have in our society I’m not sure they’ve done us the good they’re intended to do. We’re led to believe we’re free, but are we?

We live life like we’re never going to die, and as a result we never live.

We work at jobs we don’t like to buy clothes we don’t really care to wear, to wear to the job we don’t like, to which we’re driving in a car we can’t afford, to impress people we don’t like. It makes no sense. Our identity isn’t an internal one, but one that’s contingent on the subjective opinions of others.

It’s no wonder that there are so few that would fight or die for the realities we exist in because they’re not real, they’re not tangible, they’re not simple or free. There isn’t love, true love, nor is there pain or hard work or the dirt beneath our feet, dirt that is truly ours.

Wallace wanted to be able to farm without paying taxes to a lord that wasn’t of his country. He wanted to marry a lady without having to pass her on to that lord, first. He wanted to live a quiet life, simple, and free. He didn’t care about a big house, just a house that would protect his wee ones from the elements. He didn’t care about a vehicle nor did he wish for cleaner clothes, he wanted simplicity and he wanted freedom.

There’s nothing simple nor free about our lives.

I want simplicity, I truly do. I want fresh air. I want to look at a woman I love, sons and daughters I adore, work the land that I own and defend to earn and enable my family that I love to live the life they desire to live. This is a circle of life that I could die for. It’s a circle of life that feeds off every other aspect in the circle, all working towards living life, not being a pawn, a worker bee, a person who hates what they do to pay for shit they don’t need nor want, to impress people that they shouldn’t ever care to impress.

[Tweet “I want violence and silence. I want war and peace. I want freedom.”]

Standing before the monument and the statue that was built many years ago to honor a man, a leader, and the very definition of a warrior, I’m humbled. My eyes water. My breath becomes short as I struggle to find its source.

I long for the life he fought for and for the life he lived for, but would I have the courage to live it, and die for it? I pray that the answer will one day be answered in a positive light. I pray to know life like Wallace did, to make an impact like he did, to feel the pain and loss and love and freedom, as he once did.