6. A warrior is a whole man entering a relationship, while a coward is 50% of a man, looking for someone else to complete him.

A warrior, though he’s constantly evolving, growing into a better man, is completely a real man. He doesn’t need to you complete him, but he wants you to accompany him in his grand adventure.

The coward is looking for someone to make him feel complete. He needs your support to survive. He can’t go on without you, while the warrior can, but won’t – if you’re the right lady. 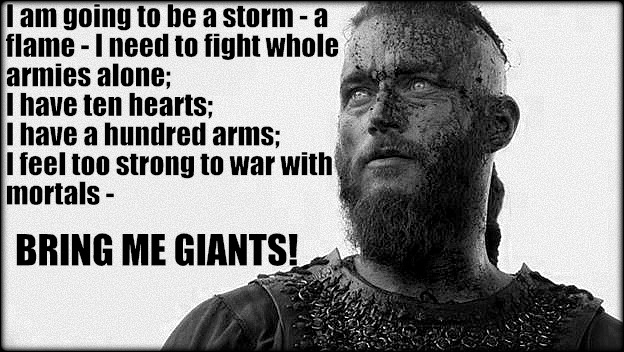 7. A warrior has ambition, while a coward craves safety.

So your boyfriend or husband is willing to take risks to create a greater life for you, and it pisses you off. Don’t let it. Let the man take risks. If he’s a warrior, he’ll know the importance of his risks, and how hard he’ll have to work to make them worth his, and your, while.

A coward will avoid risk and click to safety. Much like he’ll stick to his job, he’ll stick to your side, not necessarily in a loving way, but in a “needing” way. If your man has ambition, hang on and enjoy the ride, if he’s a warrior, he’ll take care of you, don’t worry.

8. A warrior will praise you and lift you up, while a coward will resent you.

A warrior will provide you a foundation that you can build upon. He’ll help you where you need help, but more than that, he’ll push you to grow stronger and become more than what you are right now. A coward will try to keep you as his own. He’ll try and keep you on his level.

He’ll crush your dreams and make you feel as though you’re worthless. If you have a man who doesn’t lift you up, who instead tears you down, you’re dating a coward.

I remember an ex-girlfriend I had grabbing my arm and telling me You make me feel safe. A warrior will make you feel as though he can protect you from anything, in which case, he’ll make you feel free, and as though you can accomplish anything.

A coward will have the opposite effect. He won’t make you feel strong, nor enabled, but weak, crowded, and confined to your current state.

If your man doesn’t make you feel physically safe, you’re not dating a warrior.

10. A warrior dies for you daily, while a coward lives only for himself.

There’s a myth that a warrior is a soul meant to walk this earth alone, sword in hand, battle ready, tested, and weary as long as his lungs take in air. This isn’t true. A true warrior is a protector as well as a conquerer, and he fights for far more than his own gain.

A warrior will do everything he possibly can to give you a great life, including the love that a life of meaning entails. A coward is out to feed his own ego, to gain reassurance. He’s after his own gain, he’s on this walk alone and doesn’t give a shit about you. He may on outward appearances, but his actions and his words can tell you different.

Men, be a warrior. Die for your lady daily. Live strong. Be strong. Be the courageous man you have within. Not only for your lady, but for the planet, the people in it, and for yourself. Life is so much greater lived as a warrior. A wild-at-heart, grab life by the balls guy who wants to live, not merely wait out his days in a monotonous, turmoil-free existence. Take courage. Be a warrior. Be Legendary.