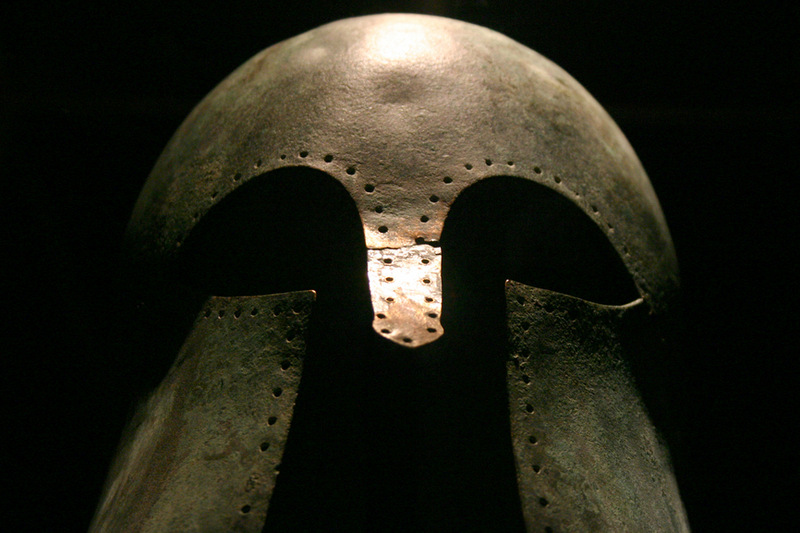 It’s becoming more and more apparent that each man has the same amount of control over his life; be it his present or his destiny. This control comes in the form of a decision: how we react to the events, good and bad, that occur in our lives. Strong men choose to see hardship not as a curse, but as a worthy challenge. They choose to control what they can, and understand that what they can’t control is simply fortune working as she does in the lives of all men. (Read this: The Truth About Who Controls Your Fate)

The weak man chooses to see the hardships that come into his life as a curse, as things that happen to him out of some form of celestial spite, and rather than working hard and acting with self-reliance, he pouts and cries and curses the world that has cursed him.

It’s important to understand the power you hold over your life, which is the power to react to whatever happens however you like. I urge you to react as the warrior does, not as the coward tends to. 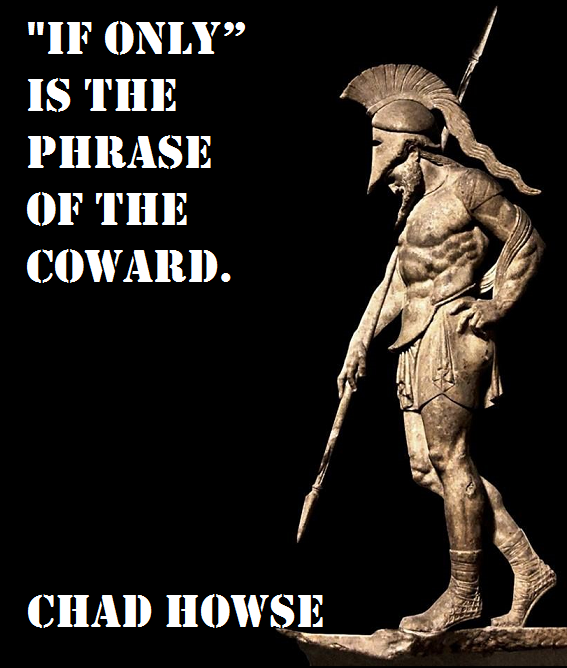 “If only” is the phrase of the coward.

“If only I were taller, smarter, better-looking, richer, tougher, happier, more talented.” “If only” is the phrase of the coward.

If only is dependent on things being not as they are, and things being as they are is a matter of perspective. We each have something to offer, and if we lack talent or natural ability, pure hard work can make up for anything.

Never say the words “if only”. Things are the way they are and only the coward “wishes” them to be different.

Man up and do something about your circumstances. YOU hold the power over your life, don’t give up that power by uttering those two useless words. 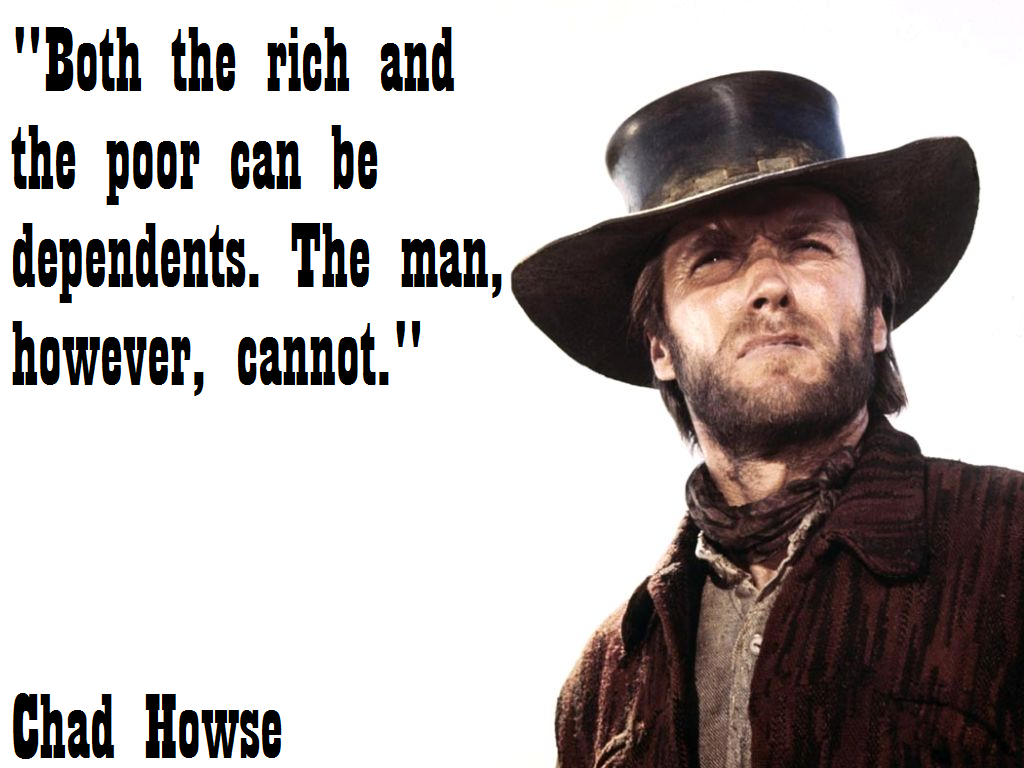 “Both the rich and the poor can be dependents. The man, however, cannot.”

Having more money simply means you have more money, it may also mean you’re dependent on the things you own, thus, they own you.

Having less money doesn’t mean you’re any less, though you too may be dependent on something else to provide you with food or rent or whatever you need to survive.

Both are dependent. True value as a man comes when you’re of value to others, where you’re not tied to the things you own nor are you dependent on other means to sustain you.

Don’t ever have envy in your heart, especially when what you envy doesn’t mean anything. Don’t, also, buy things to find value. It’s a bottomless pit that will see you a slave to things that have no value. 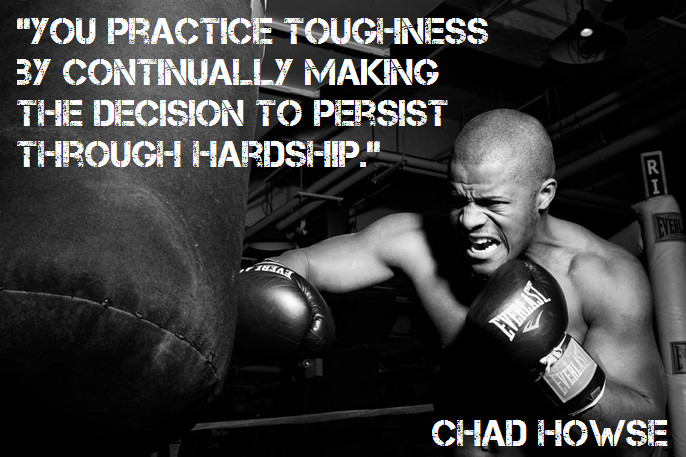 “You practice toughness by continually making the decision to persist through hardship.”

I get emails about toughness. Fellas asking how to become tougher because they’re constantly making weak decisions. There is no magic recipe for toughness.

Daily we’re faced with decisions, a fork in the road, to the right is the easy road, quitting, a life of ease but also failure, to the left we have the tough decision to persist, keep working, and improve.

That’s how you become tougher. 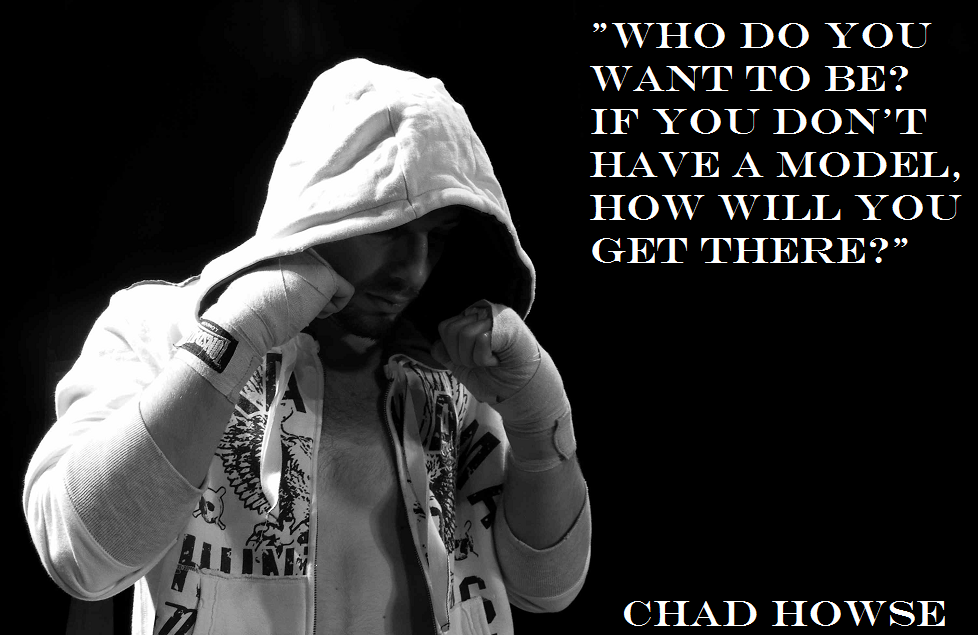 “Who do you want to be? If you don’t have a model, how will you get there?”

Too many of us simply want to “improve” without fully understanding or identifying what that improvement will eventually look like.

Identify your model, then work on mapping out the habits that will get you there. 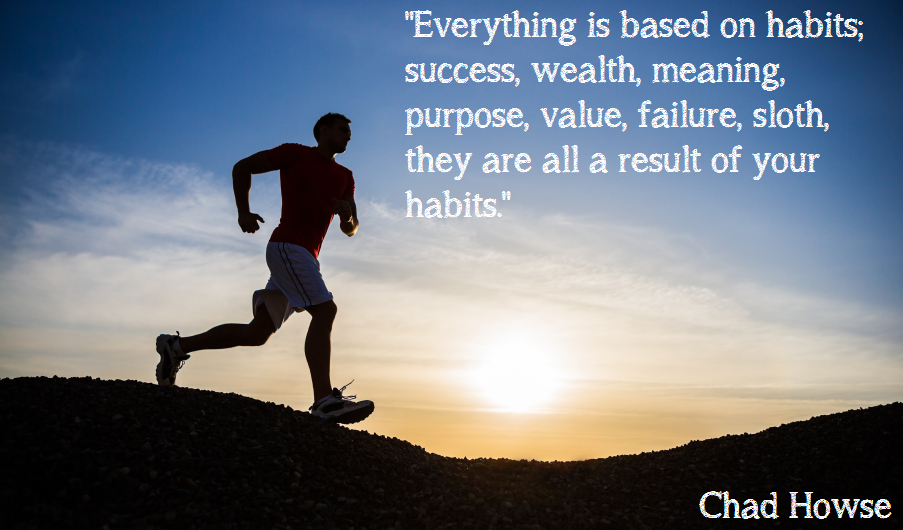 “Everything is based on habits; success, wealth, meaning, purpose, value, failure, sloth, they are all a result of your habits.”

Create a routine, one that you follow daily. A routine that’s filled with habits that make you better, toughen you, teach you, allow you the challenges necessary for improvement.

If you’re learning and testing yourself, you’re growing. (Read this: How to Create Your Own Strength Program) 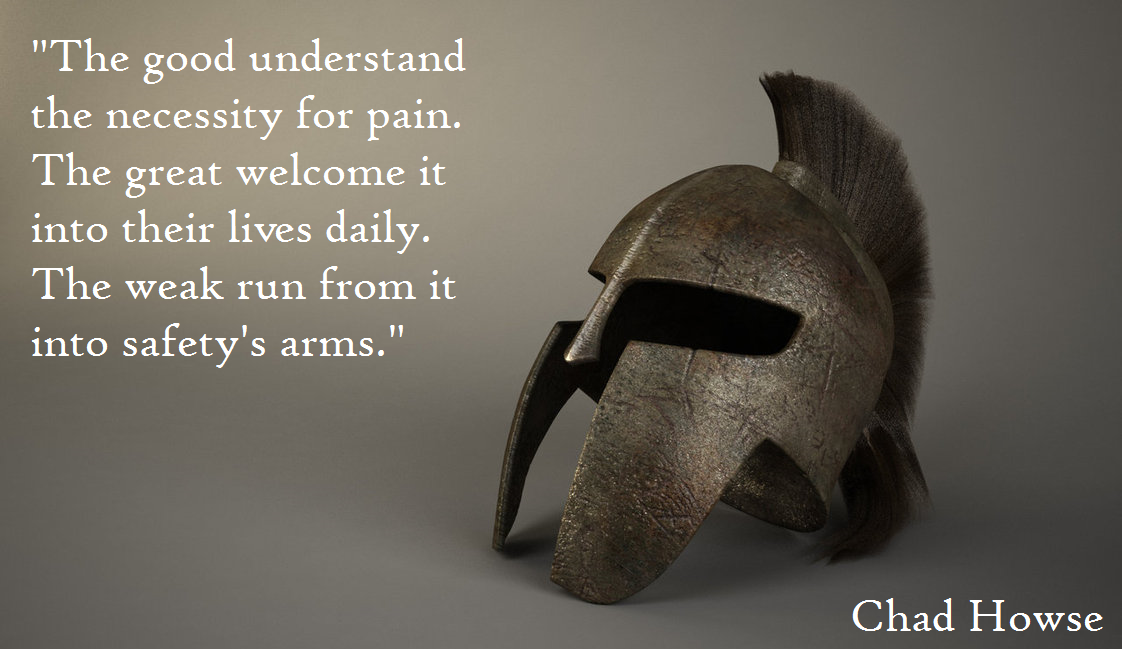 “The good understand the necessity for pain. The great welcome it into their lives daily. The weak run from it into safety’s arms.”

Safety is where failure makes its home. It’s in safety, in only attempting what you know that you can accomplish, that you never grow because you never push yourself.

If you’re going to live a flourishing life, know that pain is a friend, not an enemy. 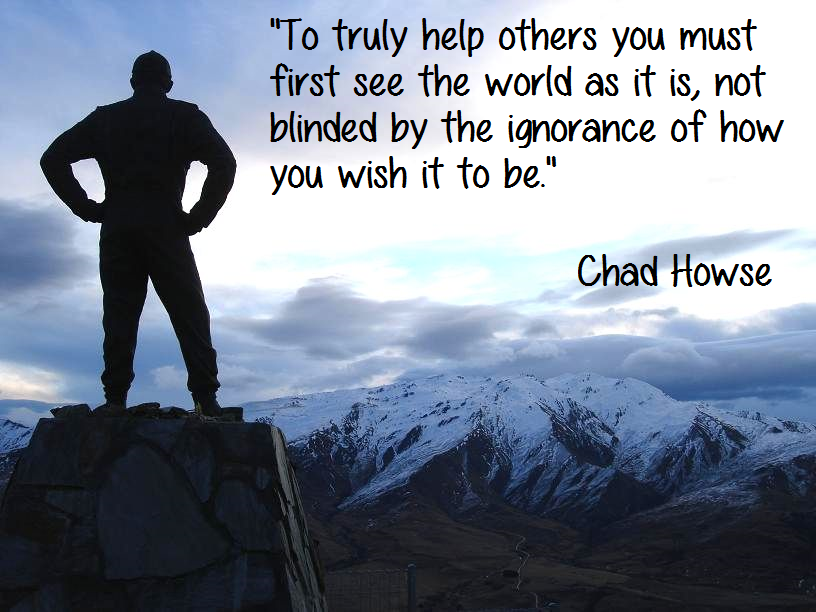 “To truly help others you must first see the world as it is, not blinded by the ignorance of how you wish it to be.”

To truly be of service you must understand that you cannot reason with some people, that evil does, indeed, exist. You must know that the world isn’t fair; that we do not all deserve the same, rather, we all deserve what we work for. There is a need for personal responsibility. (Read this: Your Idea of Equality Really Isn’t Fair)

The best among us aren’t blinded by the notion that humans can create a utopic existence, they know we are incredibly flawed and that nature and this world are harsh places. As such they aren’t blinded by illogical actions of evil men who prey on the innocent, they’ve prepared for them and they defend the innocent.

When you know both the harshness and the beauty of people and this planet you can then begin to truly start solving some problems.

“If you’re going to live a flourishing life know that pain is a friend, not an enemy.”

Just like defeat teaches, pain allows growth. We need both to improve. If you want to stay as you are and where you are forever, then avoid it, if you want to learn and grow and improve, then embrace it. 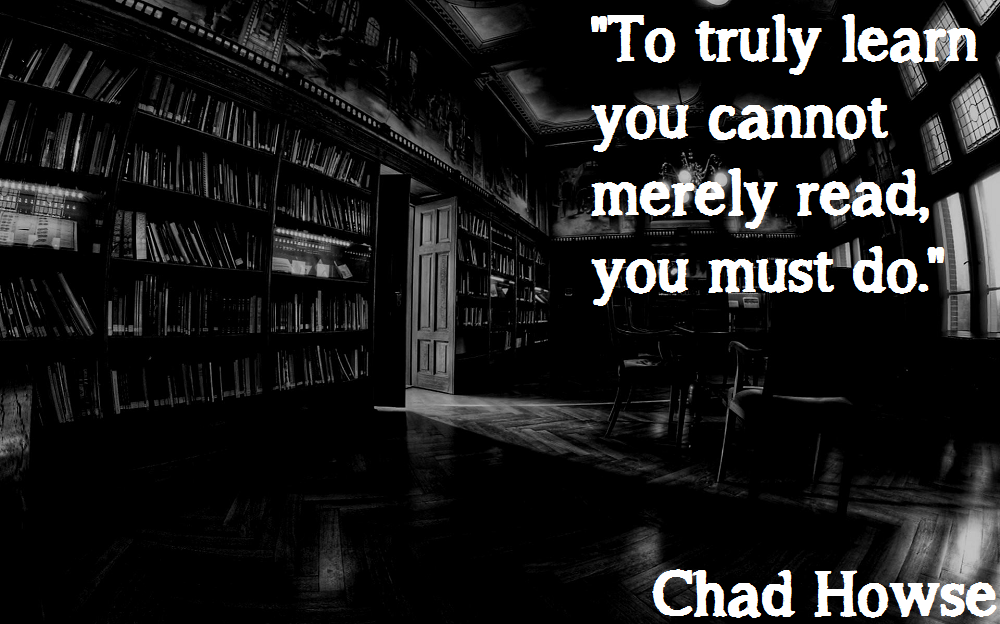 “To truly learn you cannot merely read, you must do.”

Philosophy was once a thing of action, it was lived. It’s become something that’s taught by men who don’t do, in classrooms that don’t change.

I’d rather learn about philosophy from the man who’s lived an arduous life yet still has a smile on his face than the man who confines himself to the classroom. 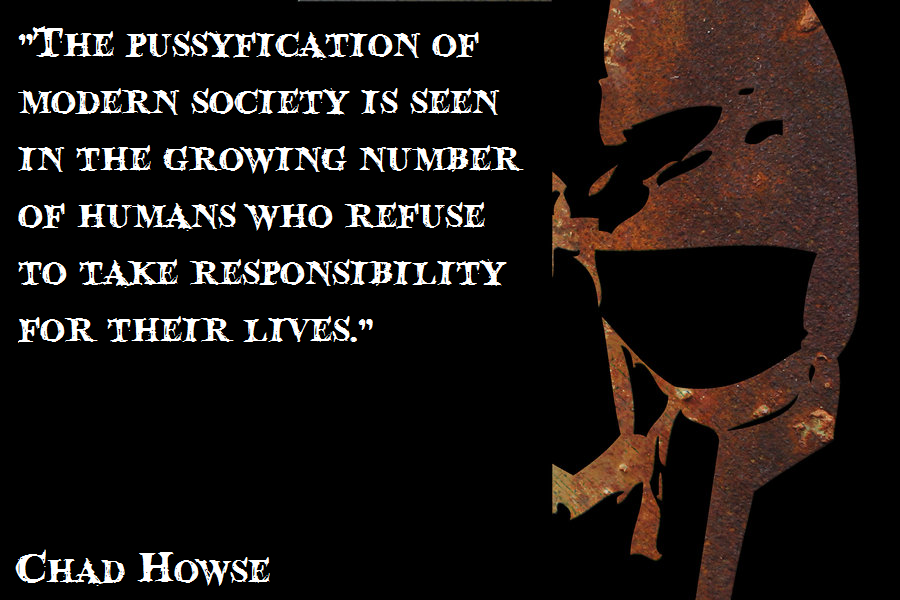 “The pussyfication of modern society is seen in the growing number of humans who refuse to take responsibility for their lives.”

Not only are we not taking responsibility for our own lives, but we’re making excuses for others as well.

People get this wrong so often. Making excuses for others isn’t empowering them, it’s weakening them, it’s holding them in lesser regard as you excuse them from the responsibilities of life. 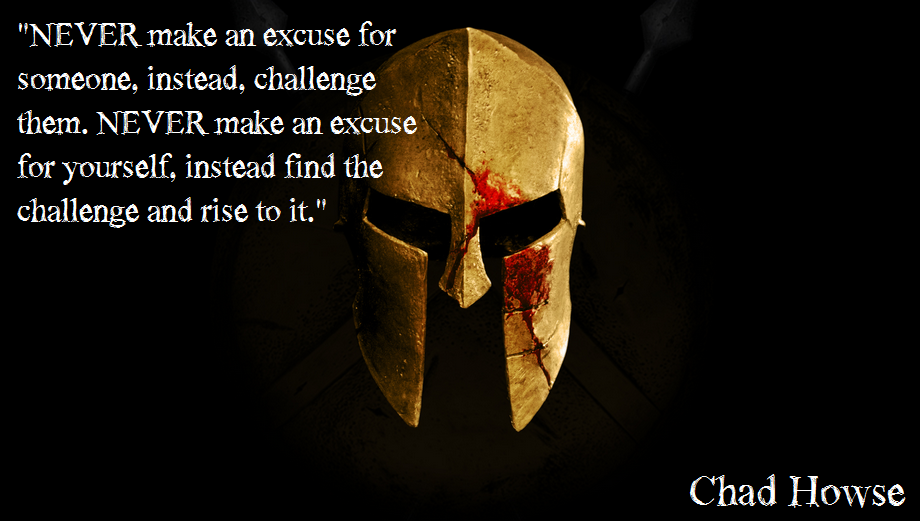 Show others that you respect them enough to challenge them. Show yourself that you’re strong enough to handle whatever the world throws at you, and take it all with a smile. 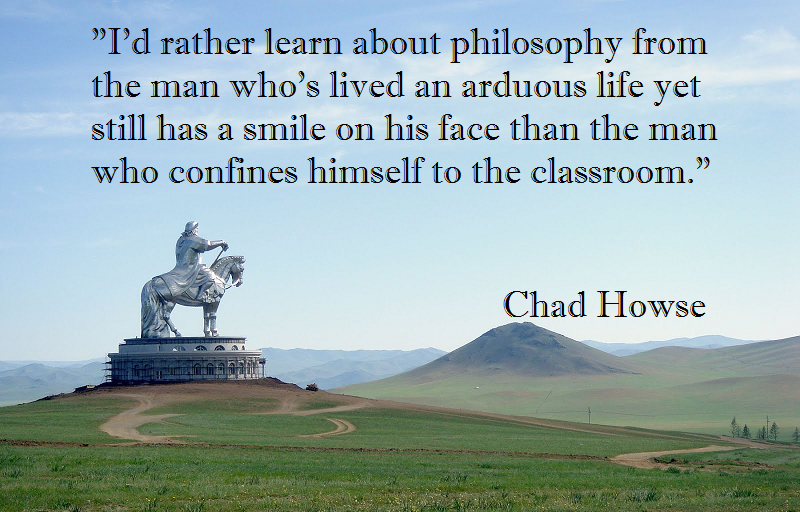 “I’d rather learn about philosophy from the man who’s lived an arduous life yet still has a smile on his face than the man who confines himself to the classroom.”

Philosophy is learned, like all things, through trial, persistence, and reflection. You cannot understand the ways of the world, of your own mind or soul, if you don’t act, if you don’t feel pain, if you don’t lose and persist and eventually win.

Wisdom can be found in books, but it must be applied to life. Knowing is important, but it’s only relevant if it’s done. 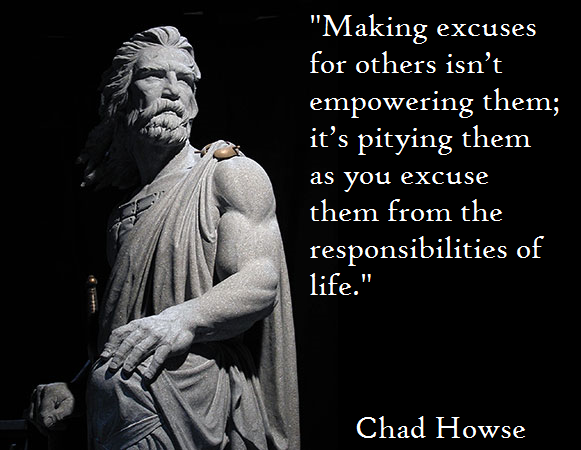 “Making excuses for others isn’t empowering them; it’s pitying them as you excuse them from the responsibilities of life.”

Don’t make excuses for anyone. Hold them accountable and hold yourself accountable. We don’t need people pitying other people, nor do we need humans pitying themselves.

We need strong men of action who lead, not weak men of inaction who follow.