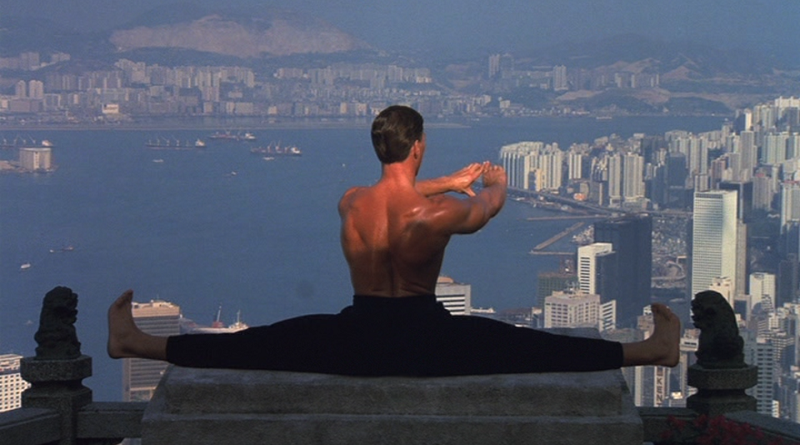 To be at your best you cannot simply be physically great or mentally impressive or spiritually strong, you need all three areas to see your potential. Fortunately, by strengthening one, if you’re aware enough, you strengthen the other areas. Take the gym, for example. When you’re training your body in the gym you’re also training your mind and your spirit to be able to withstand pain, and a man who appreciates pain and sees its value and its necessity in his rise and evolution is a man who is at least capable of reaching his potential.

Train your mind by reading, extending what you now know. Train your spirit by persisting, learning, and enduring. Train both, and your body, by training, hustling, and growing stronger. 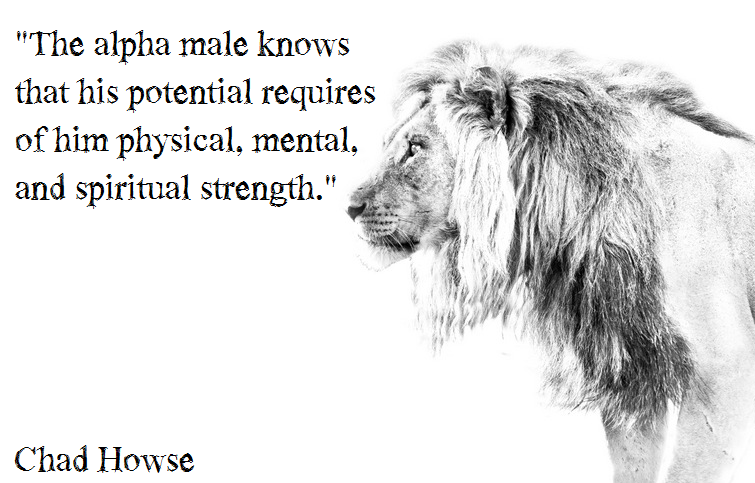 There shouldn’t be a line drawn between the warrior and the thinker, the philosopher and the hunter. Philosophy can’t be relegated to thought, it requires action. Thinking cannot be confined to thought, it must be practiced.

Those who discount physical strength and action want to live in a world where fears aren’t actually faced, where necessary steps aren’t taken, where ‘thinking’ good thoughts is as good as being good or defending those who need defending.

A leader understands that to slip in any area is to slip in every area. Become stronger in the mind, the spirit, and the body, and don’t keep them to theory, live this strength daily. (Read this: 21 Steps to Becoming an Alpha Male) 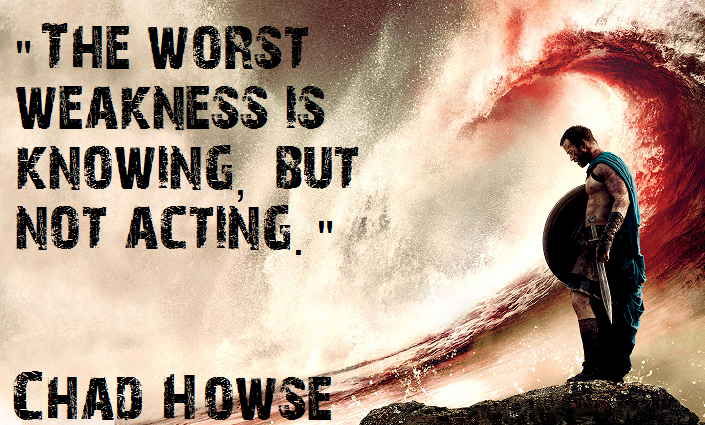 There are so many who know, but don’t act, who have the capacity to do, but allow fear to keep them small.

Ignorance cannot be their excuse, cowardice is the only thing that keeps them small.

I’ve been here, and I’ll likely be here again. Know when you’re being a coward and rise up, rise above your weakness and face your fears. 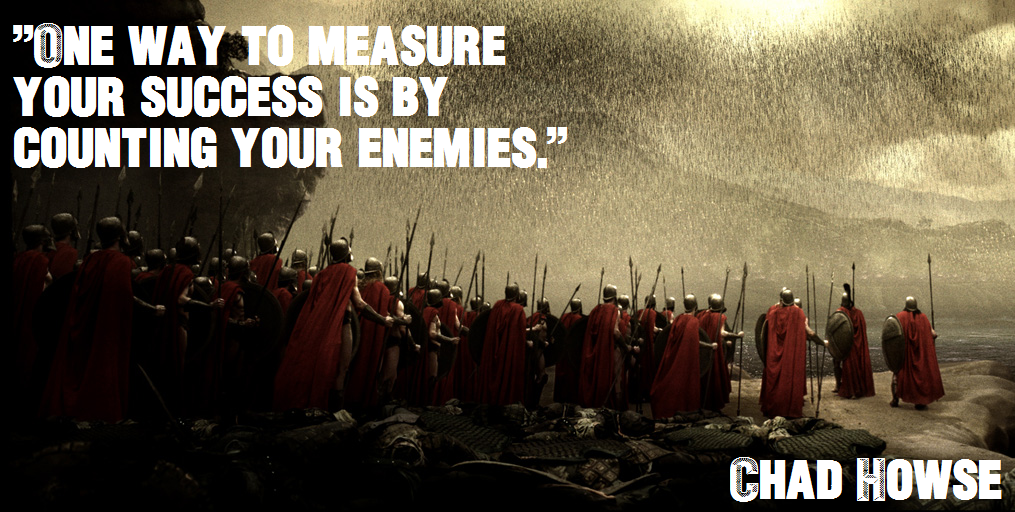 Popularity isn’t a great measure of success. Popularity comes and goes and it’s in the hands of others.

If you look throughout history you’ll see that the greatest among us have also had the most enemies. Why? Because they’re doing what others wish they could do, they’re speaking the cold, hard truths and that scares people, and they’re calling people out, if not by words then by actions.

So, do you have enough enemy’s? (or, what the kids call ‘haters’)

Don’t run from enemies, don’t change your message because they’re becoming more vocal. They’re critics, they lack the courage to enter the arena of life so they critique those who do.

When you start to have enemies, know that you’re doing something worthy. 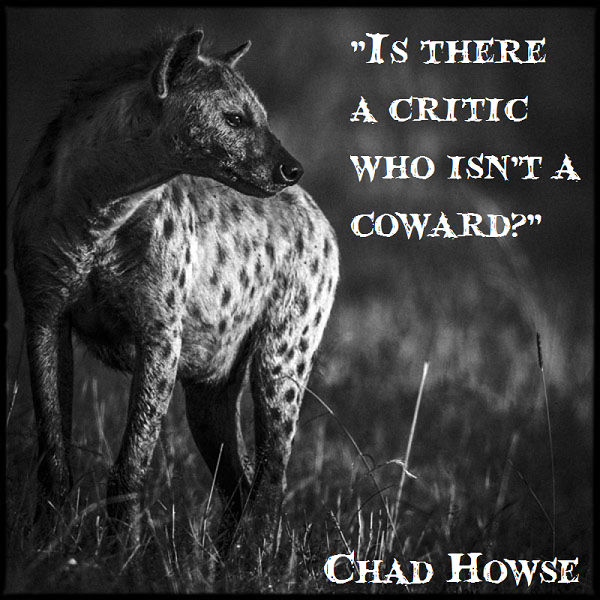 Is there a man who points out how the strong man stumbles, failing to find the courage to walk into the arena himself, who has courage? (Read this: Courage. The Most Important Virtue a Man Can Posses) 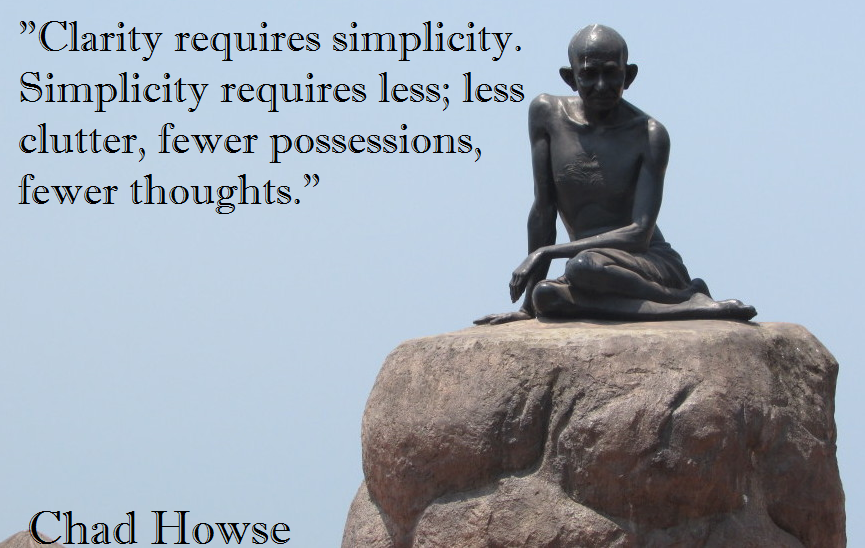 Our society is set up to tell us that we should have MORE. What most of us really need is LESS. We need fewer possessions, fewer clothes, fewer things we depend on for happiness.

If you’re shopping to make you happy you’re unhappy. If you think that the latest styles will improve your value as a man, you lack purpose and understanding as to what is valuable.

Spend one day this week and de-clutter your life.

One thing I’ve begun to do every few months is to throw all my un-used clothes into a bag and send them off to the homeless. We don’t need much of what we have, but there is always someone who could benefit from the things we buy without thought. 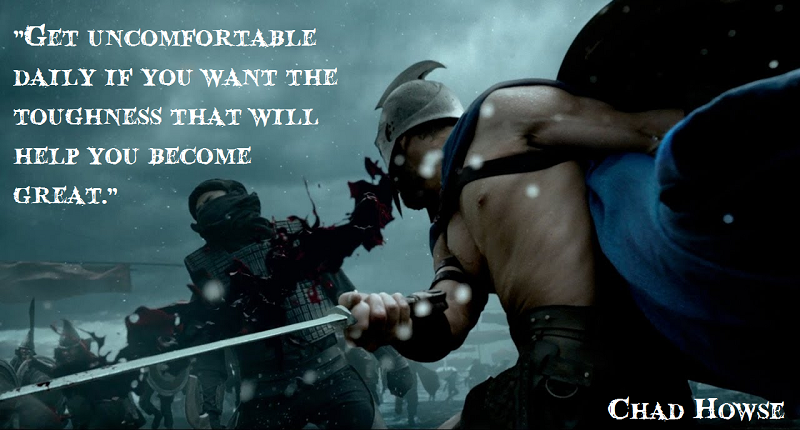 So many of us live in extreme comfort. We don’t face the cold nor the wind, rain, or extreme heat. But we should.

It’s these elements, nature, that force us to dig deeper, they help us become tougher.

Get uncomfortable everyday. Do even little things that you’d rather not do and you will practice grit, an attribute that can only serve you well. 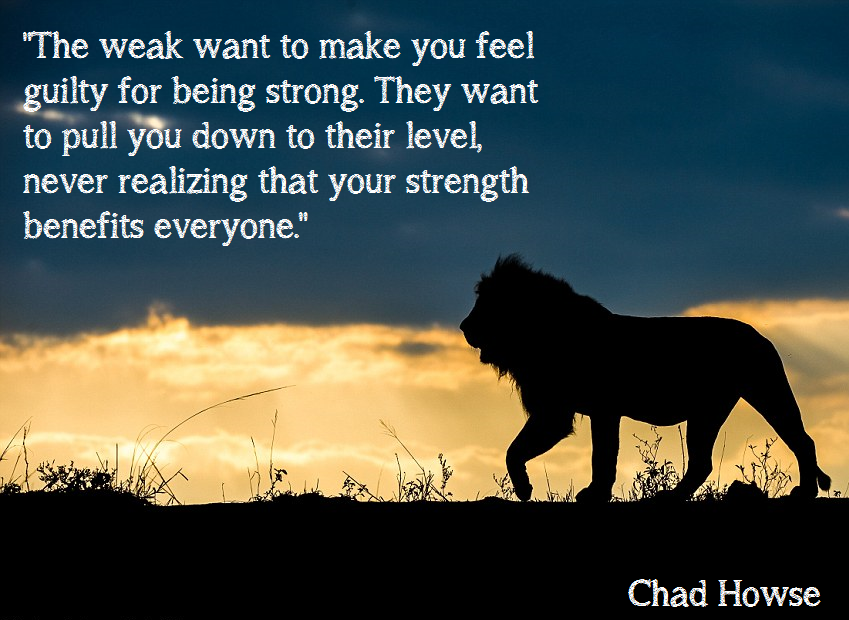 There are many in our society who want everyone to be the same, who want those who have power to become powerless. They don’t want people to be responsible for their own fate because they themselves fear responsibility, but responsibility is something you cannot escape.

So don’t worry about the weak, help them where you can. It’s your duty to improve, to evolve and grow and help others as you do. 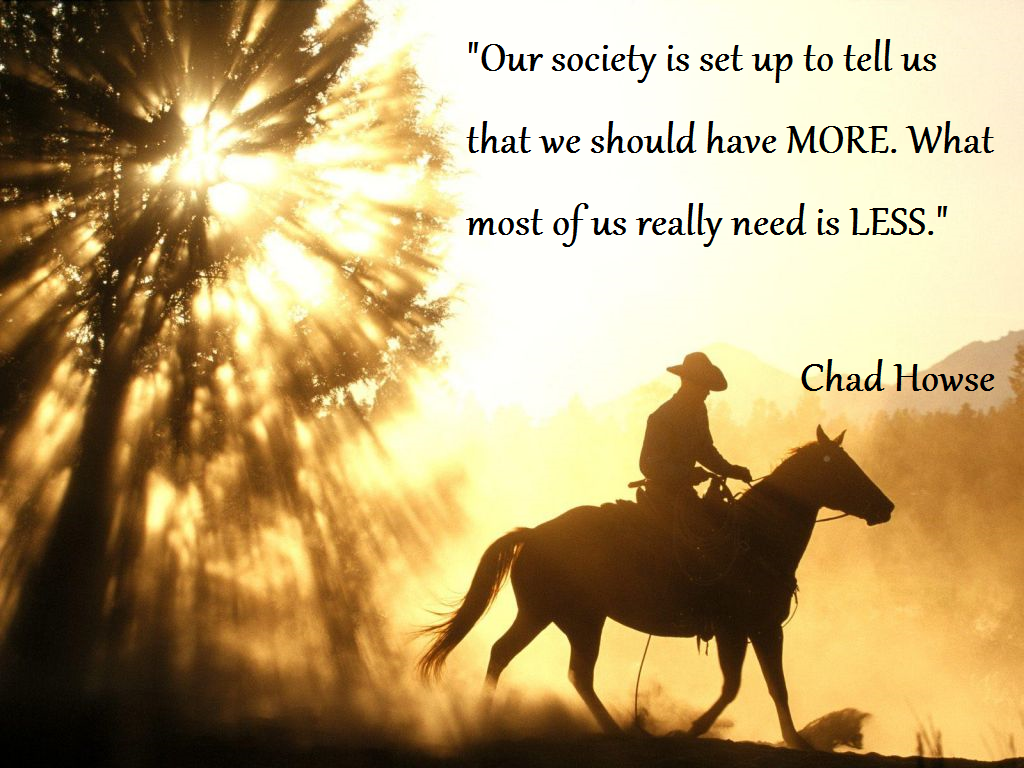 We’re bombarded with messages that tell us our value is dependent on a car or a house or a pair of jeans. This cannot be because these things can be taken from us.

The man who understands this can have them, but not depend on them.

The man who can live without these things becomes free to LIVE without the dependence on objects that so many work hours to afford, then feel empty only days after they’re purchased.

Are you working toward a great life, or a dependent one? 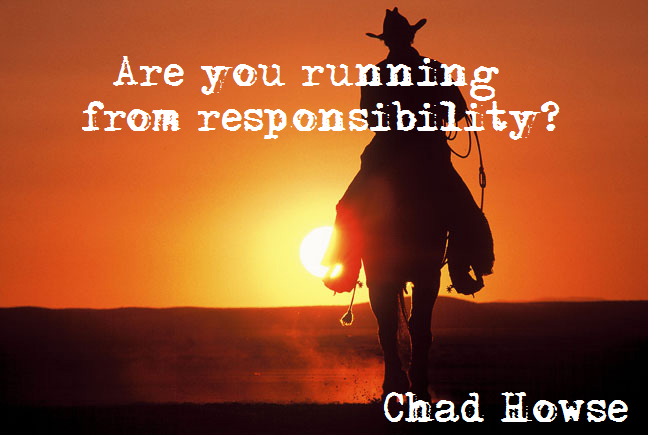 Everyone in this life is responsible for a few things:

Their thoughts, their actions, who they are and where they end up.

That isn’t to say that we’re all alone in this world, because we’re not, but we are responsible for our actions in this world and as a part of the larger group.

Do you want more responsibility on your shoulders or less?

Be a leader. Rise up and show others how to rise on their own. 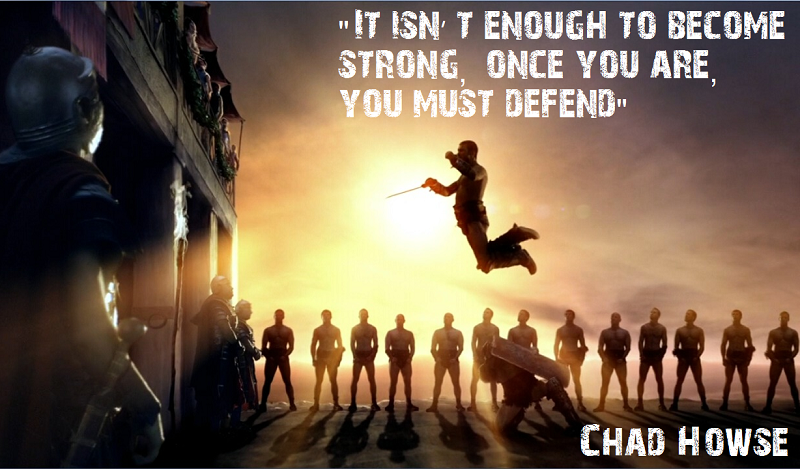 Many feel that giving aid to someone is where we should leave it, but it’s often not aid that is needed, but defense from evil.

Wars aren’t pretty and they should be avoided, but a war fought in the defense of the innocent is necessary, because as long as there have been people, there have been evil people, and as we avoid fighting evil people at all costs we feed them, allow them to spread and grow. 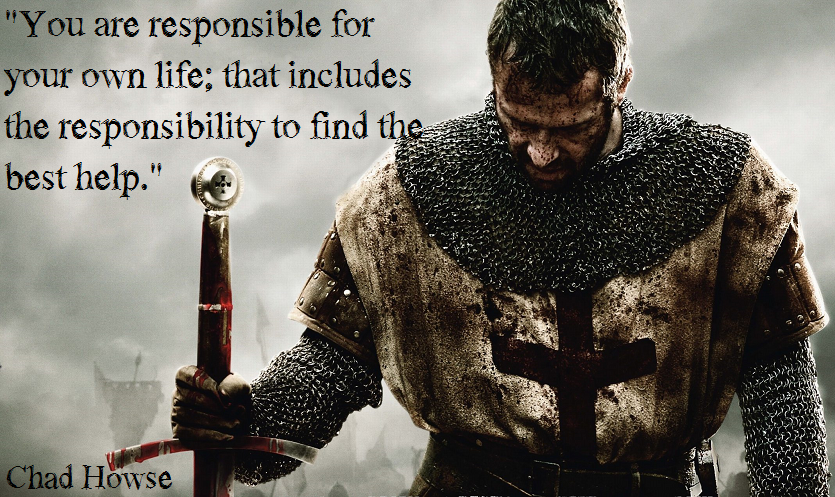 You are not alone in this world, but you are far more powerful than you realize. So man up and start taking the strides of a conqueror, not of a coward. 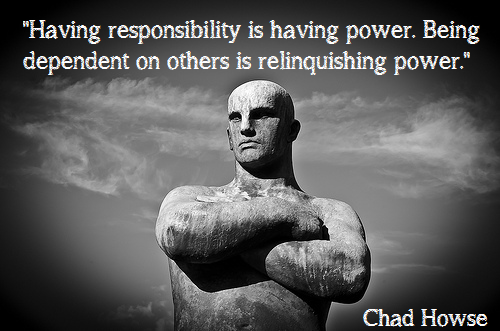 It boggles the mind that people complain about their responsibilities.

People actually complain about not being able to afford to live in an area, while others realize they cannot afford it so they move to an area that they can afford.

People complain about those who depend on them, while others relish in the fact that they are responsible for the welfare of others.

People complain about having to work everyday, while others thank God that they CAN work every day.

Life is a matter of perspective…

More Man Up Monday: To Own Your Fear You Have to Face it Often