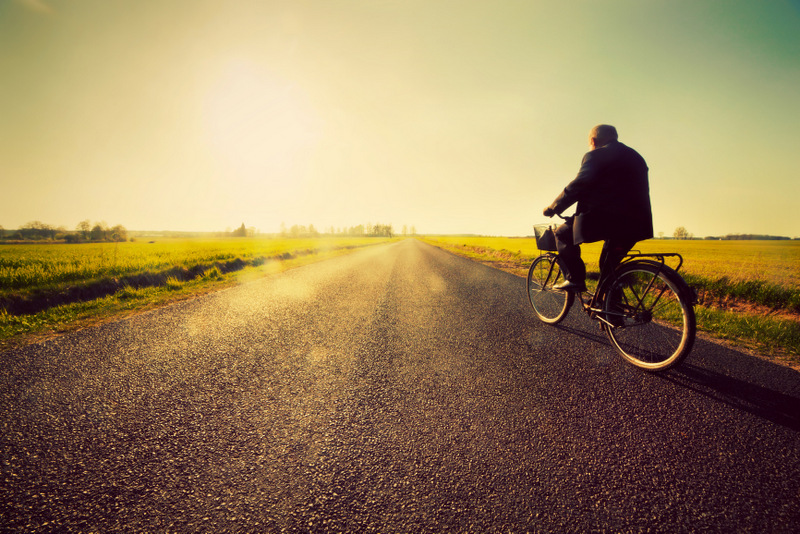 We’re oddly creative at excusing ourselves from success yet don’t bring that same creativity to creating success. We excuse ourselves from living the life we want to live because of our starting point. We say it’s not the right time to start living our dreams, that tomorrow is a much more convenient time to begin. We even coerce ourselves into thinking it’s too late to embark on a mission, an adventure, a dream we’ve kept hidden within, and confined to, our list of things we’d die to do but deem unrealistic.

Instead of making excuses to succeed, we excuse ourselves from the work and the risk that success requires. Where that final excuse runs into problems is with urgency.

With each breath we take we’re moving closer to death. The more breaths, the nearer we come to our last. Which, if sound logic were brought into the conversation, the greater the feeling of urgency there should be in risking more, risking all, and taking that leap of faith that our deepest desires require of us. Instead, we clutch what we have in an unfounded fear that we’ll lose it, and in turn fail to gain any more, live any larger. With age, with an absence of risk in our lives we train ourselves to fear losing what we have rather than aim to have and live and be more.

We stop living, stop growing, all because of an illogical fear of losing what we’ve already created. The lunacy in this is that we’re not satisfied with what we have. If we lost some of it, it really wouldn’t be the end of the world. In fact, deep down we wish we could lose it all and start over. But we don’t.

There’s a myth that adventure has to occur when we’re young, before we settle down; that dreams can only be chased when we’re young, vivacious, and in part ignorant to the odds and the cost of losing. That, however, isn’t how life works. If we’re living any kind of life with any semblance of a brain, we’re going to get better with age. We’re going to become wiser and smarter and we’re going to further understand the value of hard work and sacrifice. If that isn’t enough, we’re going to have even more reasons around us to work, risk, and live a great life, in family.

We’ll be a leader, an example for others. We’ll have more skin in the game and a greater fuel behind our desire.

This isn’t a campaign to wait to start chasing your dreams, but a warning that if you wait even one more second you’re lost. The thing is, this is true at any age. If you’re 30 or 40, 60 or 80, it doesn’t matter. You owe it to the fact that you’re alive and breathing to make every breath count and this means chasing your heart’s deepest desires, your soul’s strongest ambitions. To do otherwise is to move away with what your heart would deem as living into a purgatorial state where you’re alive and well but not alive in the sense that you’re creating a life that will be one day ended with a heart taken over by regret, consumed with it.

There MUST Be An Age Where Chasing Dreams Is Too Late

You would think that at some age the life you’ve built thus far is the life you’re stuck with. The evidence, however, tells another story. History is riddled with men and women who started chasing their dreams years after most would have labeled it “too late”.

Rather than listening to the naysayers they realized the regret that would be held in their heart if the leap wasn’t taken.

Most of us have heard about Frank McCourt’s famous novel, Angela’s Ashes. It was made into a famous movie, one that documents his tremendously difficult upbringing. What most don’t know is that Frank didn’t take up writing until he was 65. To me this makes sense. Writing is story-telling. To tell a story you have to have lived something worth reading, and typically one gains this experience with time and age.

That’s not how most of us see it. We see our age as an inhibitor not as an advantage. The truth is that it’s all perspective, and which perspective you choose to see the world in is entirely up to you.

My age is a benefit, as is my starting point in life, my family, my hard times early in my life, early in my business life, any any hard times that are still to come. They’re all beneficial. If I had the opposite life experiences that I’ve had thus far those would be advantages as well, because I’d choose to see them as such.

Frank McCourt isn’t the only story of a guy who’s started his dream late in life and realized success. Colonel Sanders didn’t start Kentucky Fried Chicken until he was well into his 60’s. That’s a man who decided to start a restaurant business until he was in his 60’s! Talk about balls.

Ronald Reagan, possibly the greatest President since the Second World War, and one of the greatest Presidents of all time, didn’t actually get into the Presidency until he was 70. Andrea Bocelli, one of the world’s most famous opera singers, if not the most famous living opera singer today, didn’t start singing seriously until he was in his mid 30’s, an age that most would see as illogical and unlikely to then go on and create success. Stan Lee, the famous creator of many of your favorite Marvel Comic super heroes didn’t start drawing said heroes until he was 43, and his partner, Jack Kirby was 44 when he created the Fantastic Four.

Passing time should discourage you from chasing your dreams, it should motivate you to act now. Age shouldn’t be an obstacle but an advantage.

Don’t dare wait another year to start living life, chasing your dreams. Don’t wait another month, another day, another minute. No breath is guaranteed. It’s cliche, sure, it’s unlikely that you’re going to kick the bucket tomorrow, but you are dying. You are moving closer and closer to that dirt nap and it’s time you stopped making the excuses that have confined you to a life that you, deep in your heart, in your soul, see as less than what you could be living, less than your potential would allow, your imagination can conjure.