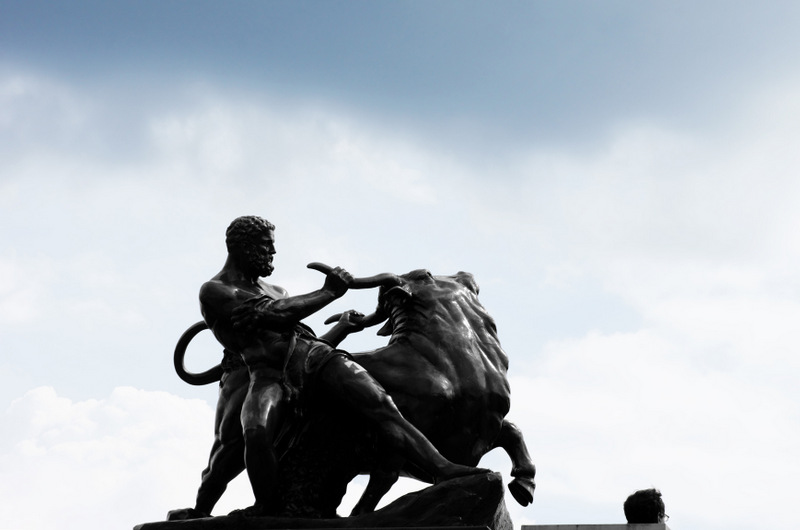 Living happens outside of the mundane. It’s found in failure and loss and pain and ruin, but also adventure and success and in battle. We live when we realize that we just about died or when our soul is hit with the reality that the dirt we tread on will some day soon be our bed.

My heart was beating so damn loud that I could hear the thing pumping blood through my body, a body that felt weightless, as if it were being lifted into the air by the butterflies pummeling my insides as I made that fateful stroll from locker room to ring to fight with hands made for war and fingers for battle. This is living, I thought. This is what life’s all about. Training for something, sacrificing for something, a thing that even scares you a bit, and then putting all that training and that time and that effort on the line in one glorious battle. It’s exciting. It’s risk. It’s thrilling, fighting, boxing, being in the ring with another well-trained human, standing in front of one another trying to break the opponent’s body and their will all at once.

Robots can’t live, yet they can do. We live only because we feel, we experience, and we fear. Can you live if you never reach beyond your grasp? Are you living if you’re doing only what you know you can? Or is this merely a state of existence, and is existence different from living?

The week previous I’d taken lessons, riding lessons. I was used to being on a horse, I was comfortable, but this was different. I’d taken my lessons on a western-style saddle, this was english. To those seasoned riders I’m sure it makes little difference but my balance just wasn’t there. We were only a few minutes into the ride when the guide who was taking me through the hills and mountains surrounding Norcia, a small town smack-dab in the middle of Italy, looked back, and with only one word of english in his repertoire, asked a question: Gallop?

My answer was immediate, without even thinking I said, “Si”, and we were off. I didn’t have time to adjust to the new saddle as we sped up a hill, then down, then through a hay field and into an open pasture with each second riding faster and faster until I realized that my balance was fine, the horse galloping and the smile on my face couldn’t have been wider. This is living, I thought, as the powerful animal underneath me strode purposefully forward as fast it could and I was hit with a sense of adventure that I’ll hold on to forever.

To live is to be free, free to make mistakes and feel pain and push through your breaking point. Living occurs in those dark moments, the moments of pain and suffering where we feel the weight of the world on our shoulders and wonder if it’s worth waking up tomorrow, if there’s really anything to wake up for, then tomorrow comes and we ask the same question, always waking up, always working a little harder, trying a little more, until one day we realize that we’ve dug ourselves out of the depths and into a new life, almost without noticing it, we’ve won.

Having rent due but not having a penny to pay it is a thrilling experience. It opens the doors for miracles to occur and for us to prove even logic wrong. Working for decades at a job we despise, but a job that allows us to feed our family, put clothes on their back and attend the school of their choice, this is living. It gets lost in the “do what you love” attitude of today, where the 9-5 is the devil and location independence is heaven. A time where doing what you love has taken the place of doing what you must.

The man who works his ass of every day of his life not doing what he loves but doing what he must for the ones he loves, he’s living. Whether he knows it or not he’s found the secret of life, a secret where we aren’t the center, but our families are. He’s living a far greater life than the guy who avoids responsibilities and chases dreams without ever making the real, painful sacrifices necessary to make them become a reality.

Being an entrepreneur isn’t for everyone. Not many people can spend an average of 3 years making no money with no guarantee that money will ever come. Most people have mouths to feed and greater responsibilities in their lives than doing what they love.

This article poses more questions than answers but there are a few takeaways:

So live. Risk everything at every opportunity. Money isn’t real so don’t make it your God. Don’t think it will make you happy and don’t ever give it power over you, always have power over it. Ask the girl out, take the trip, start the business, put your head down and work because your life exists for theirs.

You will die very soon, so you’d best begin living.

Your time is ticking. Slowly but surely you’re dying. Open your life up to adventure. It’s in adventure that we feel alive and if we feel alive we’re alive and living and doing what we’re supposed to be doing.

The stories weren’t told above, but I’ve never felt so alive when I’ve felt connected to a community, when I’ve been giving more than receiving. Be it charity or providing a service that people find valuable, give everything you have of yourself. The secret of life isn’t money or success, it’s giving, seeing the smile on a child’s face because you lent them a helping hand and asked for nothing in return but a hell of a lot more than you’ve given.

Get away from the stuff you know you can do and charge into the battles you think you can’t win. Prove yourself wrong. Gain the confidence that comes from winning battles you thought you’d lose. Feel the thrill of victory and know the bitter taste of defeat. Life occurs in both ends of the paradigm, but not in the middle, a space devoid of action, filled with monotony and safety. Life isn’t in the eye of the storm, it’s not in the calming air, it’s on the outskirts, in the strong winds that shake you and do their best to break you.

Withstand the storm, fight it, don’t flee from it.

There’s a bit of a contradiction here, on one end we have to hustle and work our asses off to build the life we want to build, and it’s those who hustle, endlessly, that gain the most in the way of knowledge and in self-development. Hard work is life, don’t get me wrong there, but in my travels I’ve learned something very simple: work your ass off everyday, but when that work is done, get off your ass and out into the world. Seek adventure. Do what’s new.

Work when you work, and live when you live.

Living is all those things that we don’t want to do. It’s the opposite of ease, it’s hardship. It goes against our natural desires, it’s discipline. It’s outside of our comfort zones, living is facing our fears. So few live because the act of living isn’t natural, it isn’t safe, it’s dangerous. Where living is, death must also be close. The two oppose one another but they feed each other as well. If you have courage, you’ll live. If you have strength, you’ll be able to get off your ass, out into the world, and face those fears that any normal human would avoid at all costs.

Living ain’t easy, which is precisely why so few of us are actually living. Be one of the few. Do what’s difficult, what’s painful. Fight the good fight, the necessary fight, and live to fill your lungs with freedom, with life. Become a legend. A living legend.