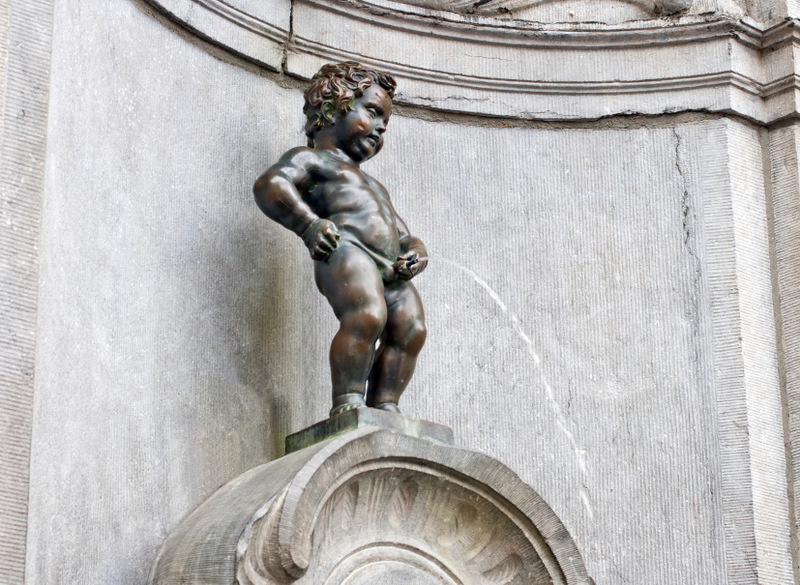 Standing in front of the toilet with far too much water built up in my bladder, I let it fly. The sound is Niagara falls-esque as it wakes up my deaf dog, the neighbors, and any other living being within a 10 block radius. The birds begin to chirp a few hours too early and the rooster crows as my bladder is relieved of its carrying duties.

This, of course, is not enough. I can’t simply stand at the edge of this bowl with a target that I know I can hit. I need to test my accuracy and distance and the strength of my stream even though it’s in the wee hours of the morning. A step back is taken. Easy. Then another and another until I reach my cusp and my stream begins to weaken.

Why the hell do I have this desire to test my limits? This episode, of course, actually happens on a somewhat regular basis made even more regular with the addition of whiskey, but also acts as a metaphor for other areas of life. And it is a very good thing, these limits we push and if we’re just talking about piss, then fine, but it’s good that we push our limits in other aspects of life whether the contest of “pissing” is purely to test our own comforts or if it’s in competition with another human.

[Tweet “Trying to win is good. Never let anyone tell you otherwise.”]

It’s a part of who we are as men. Years ago when men weren’t yet able to survive without fighting or hunting and killing, winning meant living. Losing meant dying. Today, winning means earning and living on our own terms while losing means living on the terms of another.

Side note: Winners lose more than losers. Losers never enter the pissing contest. They don’t test their stream. They stay small, confided to their toilet never daring in public to take steps out of their comfort zone that keeps them living the life that they’re expected to live but deep down despise. Winners don’t care if things get messy or if they fail or miss the bowl because they know that it’s all a part of the process of testing their limits; of growth.

I’m beginning to realize what a great metaphor pissing in a toilet bowl is for life.

Those who stay close to the bowl stay safe. They weight their options. They’d rather not risk getting their urine all over the floor. The excitement of seeing how far they can venture from the bowl simply isn’t worth the possibility of cleaning up mess.

The pissers though, that is, those who take steps back knowing that they may have some clean-up to do as a result, do push their boundaries. They venture out of their zone of comfort because whatever binds them confines them, and to be confined is to not be free. Pushing yourself isn’t simply about succeeding or doing something new – though both are in a man’s nature – it’s about freedom, which is what a man must be to live a life of value.

Those Who Don’t Aim Higher vs Those That Do

Most don’t aim higher because they’ve been trained not to. Actually, we’ve all been trained not to so it makes sense that the vast majority of us stay close to the bowl. It takes guts and the ability to see the bigger picture to venture beyond the bowl into the world of the pissing contest.

It takes the ability to see the big picture because its only when you see the picture as such that you see failure as a lesson rather than as the end. The guy who stays close to the bowl of life, the zones of his comfort, can’t see the big picture because he’s never experienced the sting of defeat and moved forward anyway. He saw it and sees it as the end. So where he may have tried to move out of his comfort zones once before, he got bit, and getting bit wasn’t fun so he went back to the place where he started, the space of ease, void of true growth because true growth only comes from doing what you thought you previously couldn’t.

Growth can only occur in the face of fear not in the presence of ease.

Kids are fearless. The first time I took a step back from a bowl whilst pissing was as a wee lad, an adventurous soul who dared to test the waters at every opportunity. My guess is you’re the same.

When we’re kids we climb trees, literally climbing higher and out of our comfort zones. We play nicky 9 doors not to disrupt the old humans in the houses at rest, but for the thrill of possibly getting caught. We move toward fear rather than running from it. We get in fights to solve disputes and then become best friends with the guy we fought because its only in a fight that you can really know a guy’s grit, his toughness, his gameness.

Men don’t fight anymore. I now it’s a good thing because men rarely possess honor any longer and as soon as a guy puts up his dukes another dude pulls out a bat or a gun or a knife because cowardice has taken the place of the honorable man that grew up fighting and knows the unwritten laws of a one on one battle. Fighting is good. It’s not always a good solution but don’t discount its value especially when in defense of someone who can’t fight. As our kids are forced not to scuffle they lose the toughness and grit and gameness that comes when you prove to yourself that you can get hit in the face and keep moving forward.

[Tweet “As we domesticate our boys we emasculate our men.”]

Men don’t adventure anymore. We stay confined because our insurance policies determine what’s acceptable danger and what isn’t. We think more about the possibility of dying than the fact that we’re dying with each second, moving ever closer to that bucket that we all kick.

The reasons are endless, and I know them, and I don’t really need to cover them because I know you know them. You’re a smart tribe. You know that as responsibilities increase so does our fear of losing what we’ve gained. As we become members of society, as we grow up and enter the workforce, we get tamed and trained and emasculated. Our schools do the best job of it as they train us to sit still and listen and resist every boyish, adventurous, manly urge in our body and instead fall in line.

We know why it happens but does that mean we have to let it happen? Can we not continue to take a step back from the bowl and let it fly? Can we not be adventurous married men and role models and fathers who take care of the shit we have to take care of all the while leading an inspired life – and not just a life that inspires others but inspires us to wake up every damn morning and kick the crap out of the day that aims to keep us small and confined to this mediocrity that has claimed so many victims already?

I say yes. And yes not in opinion but in fact. And I don’t think it’s simply an option but a path we have to take if we’re going to be the men our families and our societies need us to be. The adventurers, discoverers, innovators, builders, creators, farmers, and teachers not by words but by actions.

If there’s one thing I have trouble with it’s the routine that the masses blindly fall in to without any thought or awareness that with everyday they’re doing what’s expected of them, never pushing the buttons that need to be pushed or asking the questions that need to be asked or living the life that needs to be lived. They’ve stepped up to the bowl and they won’t dare take a step back. Splashing is just too dangerous for them. It’s just a little bit too scary, this idea that things might get a little messy in their quest to do a little more, be a little better, dare a little mightier.

Step Back From the Toilet Bowl, Sir.

Your soul is calling you to take a step back. I’m serious. Somewhere, maybe boggled down deep in your subconscious is an adventurous man who wants to do stuff. Simple. He wants to speak up or stand out or work harder or stop complaining because he hears so many damn people complain and he knows that all it does is keep them small and insignificant.

There’s a part of you that wants to break free from the monotony of doing what’s accepted. This guy has a brain, he knows that not doing what’s expected doesn’t mean bucking responsibilities or not taking care of his family, but he also has balls, he feels that more can be done, adventures can be had, his family can be led by action and passion not with a blindfolded, castrated walking corpse who simply does what he’s told.

Piss from as far back as you can. It will get messy. That’s life. It’s messy. It’s supposed to be messy. A clean life is a boring life. It isn’t really a life at all. Let that warrior within lead the way, the hero, the badass, the adventurer, explorer, problem solver. Let your balls lead your brain to a brilliant battle. Become a fucking legend.