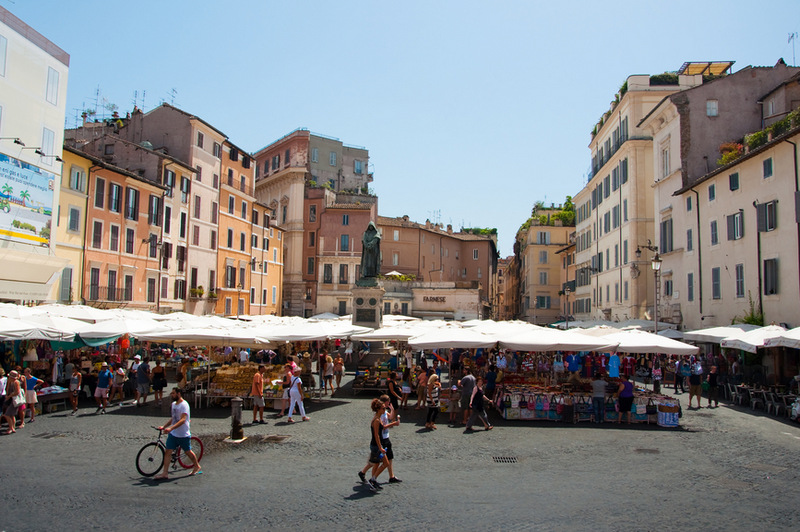 I have the terrible habit of living situations in my mind before they’ve actually happened, bringing my preconceived notions and plans into an event or a place in time, when they shouldn’t be. As a result of this planning I sometimes get flustered when things don’t go as I thought they would or should. And so, sitting on a train in Rome, running 40 minutes late to plans I had made with a young lady I’d met the night before, my heart was racing. I was frustrated with the speed of the train, the duration of the stops – which seemed far too long – and with the idea that I’m heading into town for no reason, thinking, correctly, that the lady would have up and left before I’d ever arrive.

And that’s what happened. After I got to the train station, hopped in a cab, and arrived at Campo de Fiori, the place where I was to meet the gal, she was nowhere to be found. Everything I’d thought about the night, was wrong. I didn’t have a phone so I couldn’t call her unless I found some wifi and emailed or pinged her. I’d traveled all this way, seemingly for nothing. I was disappointed, that is, until a thought came to mind…

It’s a simple idea that’s wonderfully communicated by Bruce Lee when he says, be like water. That is, go with the situation, not against it. An so, in the middle of Campo de Fiori, I stand alone, but in the moment. I stop pre-playing events in my head, going over situations that have yet to occur, and I bring myself into the present.

The girl is gone, but the night is still young, and it’s your first weekend in Rome, make the best of it, is what I tell myself. And I do. Scanning the piazza, I choose a bar. They have wifi, so at the very least I can check email or whatsapp, and figure something out. I walk in, order a couple ounces of Jim Beam, and sit down to drink. I ask for the wifi password, put it in my phone, and watch as the internet won’t connect. I’m frustrated, and because of that frustration the whiskey is disappearing far faster than I’d intended, and I’m once again missing the beauty that’s happing all around me.

Fortunately, a beautiful young lady next to me sees my frustration, and offers to help. Not sure what she said, because it was in Italian, but after 5 minutes I find that she speaks perfect English. So, rather than sitting alone and enjoying my drink, I join her. We talk, get to know one another, then decide to take things elsewhere. She’d been told of an excellent restaurant in the area, so we walk, have a lovely dinner and a bottle of vino. After the dinner, and desert, and espresso, I grab a cigar, and a couple ounces of Lagavulin 16, and sit down at an outdoor venue, still with her, and end our portion of the night with some more fine conversation, before I walk her to a cab and send her off.

None of that would have happened had I resisted. If I’d gone against the moment, rather than with it, I probably would have had a relatively useless night. But the night was far from over.

As soon as I drop her off at the cab, I walk back into Campo de Fiori, an outdoor piazza with the statue of a man at its center, the statue that’s pictured above, walking past a few pubs, intent on finding some gelato and calling it a night myself, when I hear, Chad!

Standing in front of me is a guy I’d met briefly on the flight from England to Rome, and had run into a couple times already, only 5 days into our respective trips. Awesome dude. Drinks would follow and flow. New bonds were formed over whiskey and water, as would an epic night that I’ll leave for another time, all made possible because of a change in attitude, and a releasing of what I wanted to happen, in favor of what was actually happening.

I learned a lesson that night. A lesson that I’ve learnt before, I’m sure, but this time I was much more aware and conscious of my thoughts, and my place in time.

[Tweet “A man must accept his situation, and make the best of it.”]

Where many of us fail is in making the best of the situation we’re in, we try to force our view of what the best is on a situation that we aren’t even in. And we become angry and bitter and frustrated as a result.

It took discipline to bring myself out of that habit of imagining what was to come, rather than letting it happen on its own. It took self-awareness to be able to see what I was doing, and pull myself out of it. Not to toot my own horn, but there’s a lesson we can all learn from this.

Don’t force your plans on to an event or a situation. And when the shit hits the fan, go with it. Make the best of it. Don’t quit, give up, or fight the current, simply float downstream.