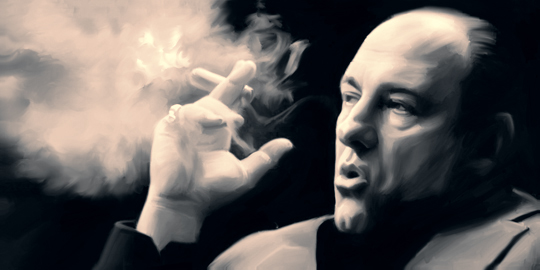 My mom is Italian. She came over on a boat from Italy not long after the Second World War had come to an end. Maybe that’s why I have always loved gangsters, and especially those of the Italian variety. Or, maybe it’s because gangsters are the cowboys of my generation. They’re the outlaws. The men who don’t live by society’s rules; rules that at times, suffocate us, make us believe we’re bound to the timid existence we’re predetermined to live.

I had a poster similar to the image on the right of Michael Corleone walking out of the bathroom, gun in hand, pointed at Sollozzo and McCluskey with a look completely void of emotion on his face. I had another like the image below of Pesci, hand extended, gun in hand, making Spider “dance”, breaking the silence of what was a seemingly lovely poker game amongst friends. 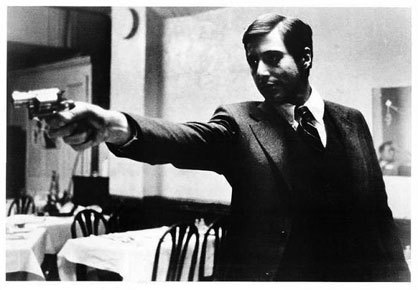 As soon as it came out, the only Christmas present I wanted was the Sopranos box set. Paulie Walnuts had me in stitches. Tony showed me what it meant to be a boss, a bad husband, and a commanding presence.

I loved the Sopranos. I love watching gangster films, and reading gangster books. So when I came home the other day to find that Tony Soprano himself, James Gandolfini, had passed, I was shocked, stunned, taken aback. I felt like I’d spent the better part of 8 years with him in my life. As a source of entertainment, even a companion after a long days work.

It’s odd that we often see actors as the ideal for manliness. We respect their grit, their pride, their raw masculinity. It’s odd because all they’re doing is acting. They pretend to be a man of value, integrity, even an outlaw bucking society. Then they leave the set, strap on their nicest shoes and smile for the cameras, diving into their real existence which is as far from the character they play as can possibly be. 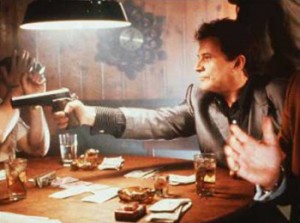 The limelight isn’t a man’s best friend. His values, character are. His dog is. That’s where Gandolfini seemed to mirror Soprano. It wasn’t the limelight that made him love his craft, it was the craft itself. For the most part he led his life out of the public eye, and I respect that. I don’t know the man, but that distaste for the glamor that consumes most other leading men in Hollywood is admirable.

Not knowing the man, but knowing the character he played, the only way I know how to show my respects, is to learn from the man he played on the screen.

Though the list of flaws Tony possessed were long, the lessons a man can learn about leadership, manliness, and assertiveness, are almost at par. His example can be used as a beacon of good, but also serve as a warning to what not to do.

1. Your mistakes have consequences.

“There’s an old Italian saying: you fuck up once, you lose two teeth.” ~ Tony

Life, the world, society, whatever personification you want to give to what we’re living in, isn’t an emotional, forgiving entity. It doesn’t “care”. Whether you fail, succeed, thrive, or dive, has little effect on the world. If you “fuck up”, there are consequences.

Every single action has a consequence. There’s no such thing as a cause that has no effect.

There’s a great scene in the movie, The Curious Case of Benjamin Button, where the narrator plays out two scenes. In one scene, every single action taken by complete strangers has to be perfectly timed to result in an accident. If even one of the actions – the woman pauses for a second, missing her taxi, the cabbie gets his coffee on time – were different by a second, the accident that eventually occurs, wouldn’t have. Unbenounced to everyone else in the scene, people who are merely going about their daily routine, their actions led to a woman’s injury – not in any way by their direct fault.

When you wake up, the effort you put in to your work, the sacrifices you make, the smile you lend to a stranger, the door you open for the elderly women, all has a consequence.

Live knowing that how you live, does have an impact. You’re not merely an insignificant piece of a grand puzzle, but an important character in an epic film.

2. Don’t take shit from anyone.

Dr. Melfi: When’s the last time you had a prostate exam?

Tony: Hey, I don’t even let anybody wag their finger in my face.

Life isn’t meant to be lived as a coward, or a lapdog, but as a warrior.

I’ve said this time and time again, but kids should be able to stand up for themselves from an early age. They need to know they have the strength to stand up to the bigger bully. If they’re not given that knowledge, they run the risk of spending the remainder of their lives as victims.

Argue that point all you want. Argue that its “dangerous” to get in a fight, and that you can get wounded, get a concussion, or break a few bones, but those wounds are nothing in comparison to the wounds carried by a victim; wounds that can’t be healed, and instead last a lifetime.

Learn what it means to stand up for yourself. Make it a habit. Then start standing up for others who haven’t learned that courage yet. They’ll see your actions, it will give them courage, and help them become stronger, better people.

3. Your position in life gives you confidence.

It’s a cold, hard truth, but success breads confidence. Whether you’re successful at being a great dad, or successful in business, being good at stuff gives you confidence.

This is true socially, and in business. If you’re a boss, you’re going to be given more opportunity to procure confidence in your workplace than your subordinates will.

Tony was a boss. He walked, talked, and acted like a boss. His soldiers acted like soldiers. With great responsibility comes great power.

What’s the lesson, then? What if you’re not a boss, or you’re not successful socially or economically, what then?

Being in a position of power doesn’t mean you’re going to be more confident, it merely gives you a greater opportunity to be confident. Bosses are often the most insecure people on earth. Their desire to fill the void left by their insecurity is shown in their hunger for power and success; for things, money, and respect.

But that’s not you.

Power, in your case, will simply reaffirm that you are great at what you do, that you are to be respected and rewarded for your hard work.

In short, have ambition. You owe it to yourself to be, and do, your best at everything you do. When you gain power, you’ll be the leader that your company, family, and friends need in their lives. You won’t be the tyrant, running the lives of others, bossing people around in hopes that it’ll make you feel more secure.

How do I know? Because you’re on this site. Everyone I’ve come in contact with that reads these articles, and follows the programs, has an internal strength and awareness, or is at least in the process of developing this strength that will help them become a great leader; a true alpha male. Continue Reading on Page 2 >>>