Three Reasons to Back Away From the Barbell is a guest post by Anthony Mychal. 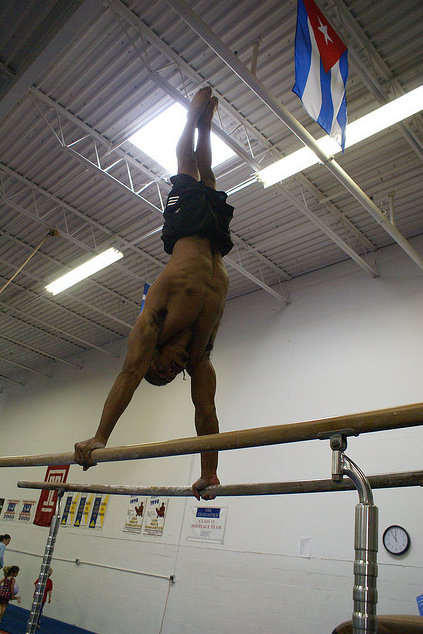 Building a body that matters means spending a lot of time in the gym among the clam and clatter of barbells and iron. And while this isn’t necessarily a bad thing (big weights do build a big physique after all), a harsh dive into barbells often leads to training amnesia: we forget about other muscle building methods.

Training amnesia is common. The feel of the barbell becomes so familiar, we think it’s the only piece of equipment that spurs progress.

But, as I’m sure you know, this is a mirage. There are many other ways to train without stacking plates on the bar. Often times, these “other ways” can elicit adaptations and gains that barbells can’t offer.

GET YOUR PLAY BACK

Part of barbell amnesia is forgetting how to “play.” And, no, I don’t mean sports. I mean having fun outdoors without being confined by rest periods, sets, reps, or much of anything.

Late sprint coach Charlie Francis used to say, “Looks right, flies right,” in regards to athletic movement. But these days, most everyone looks for their athletic answers in some kind of weighted exercise, be it a squat, sandbag carry, snatch, or barbell complex.

Real athleticism, however, is about having fleet feet—something barbells can’t teach. Over time, we lose our childlike ability to absorb and output force.

I often joke that the ultimate measure of athleticism is going to an open field, taking off the shoes, and then simply leaping, bounding, sprinting and hopping about.

Good athletes will gracefully trek along. Not so good athletes will sloppily slip around. Even worse, their knees will bark in pain—the telltale sign of losing the inherent reactive nature of the muscle.

So if it’s athleticism you’re after, you have to get your grace back. When that round orange ball is in the air (I think it’s called the sun), go outside. Run. Hop. Leap. Dance. Bound. Sprint. Jump. Jog.

Don’t think too much about it. Just go.

You might not be optimizing your muscle building potential for the day, but you might just crack a smile and enjoy what you’re doing. 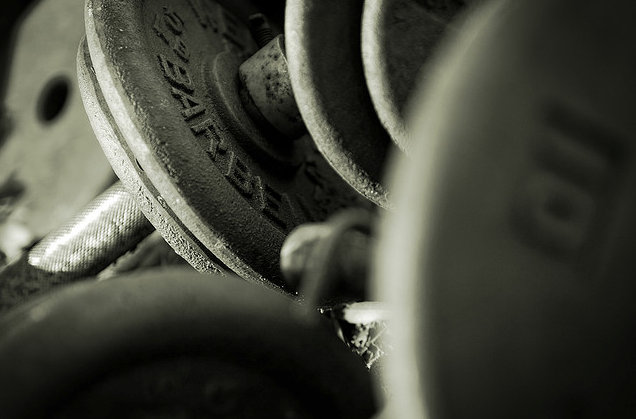 GET STRONGER AND BUILD MORE MUSCLE…?

While free weights are king at building muscle, an often overlooked way to train is through gymnastics exercises such as handstands, levers, and planches.

Now, few people dive into these exercise because they are beyond difficult. They take years to master. And they’re super frustrating because progress isn’t tangible. Three plates will always be three plates. But advanced gymnastics exercises are all “feel.”

But if you have the dedication to pursue planches, levers, handstands, l-sits, and the likes of other gymnastics exercises, there are some crazy benefits.

First, they’re an alarm clock for your abs. Nothing wakes up the “core” quite like a front lever. (Especially if you’re fond of squatting, as bigger legs are harder to hold in the air.)

To dive into these movements, pick one to do at the end of your workout. Put ten minutes on the clock and simply “practice” the progression best suited to your current strength, getting in as many sets as possible within the ten minute range. Look to hold a set for 20-30 seconds. Anything less and it’s likely too much, too soon. Anything more and it’s probably “too easy.”  (Or you can just follow Coach Sommer’s recommendations.)

Keep in mind: these exercises are “high tension,” meaning they require tightness everywhere. To make serious progress, it’s better to attack them when fresh. But since you’re not a professional gymnast, they’re likely better to compliment routines, not replace them.

[Note: If you don’t have rings for planches or l-sits, you can always lay two barbells across the pins in a power rack to double as parallel bars. And then there’s always dip bars to vandalize.] 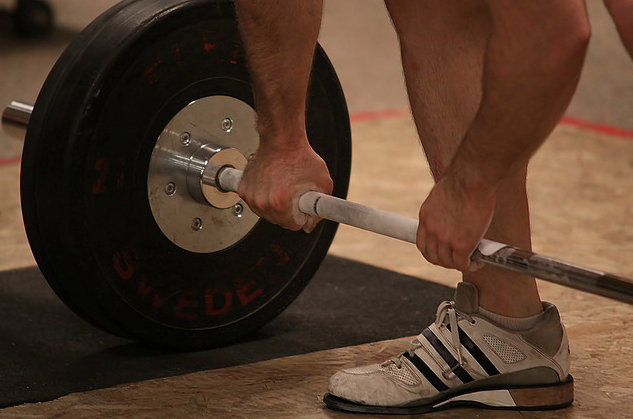 Most barbell exercises are stressful. The 48 hour rule exists simply to ensure you’re recovered enough to put forth respectable effort the next time you step into the gym. The external load often locks us into a position that stresses the spine, especially on big lifts such as overhead presses, squats, cleans, snatches, and deadlifts.

But push-ups, pull-ups, lunges and other bodyweight exercises can be recovered from faster because of the reduced spinal stress—even to the point of being able to do them every day.

So, in a sense, the 48 hour rule is gold. But, in another sense, its scrap metal.

Breach the categorization between muscles and see the body as a whole. As long as the system can recover from the stress, don’t be afraid of abandoning the 48 hour rule and training muscles with a high frequency.

For starters, we want to avoid spinal stress because it adds up. Deadlifts on Monday and overhead presses on Tuesday seems “OK” because one lift trains the upper body and the other lift trains the lower body. But both hit the spine. And that’s where things get problematic. So the best way to start is with bodyweight movements.

Here’s a simple and easy way to see tremendous gains without sacrificing time: rethink your warm-up. Instead of lazily rotating the joints, include a circuit of ten push-ups, ten bodyweight squats, and ten chin-ups. If you’re not “ready” for this, swap out inverted rows for chin-ups.

Attack them however you want to. Two sets of five. Five sets of two. Doesn’t matter. What’s important is getting the work in.

Not only will it help circulate the juices through-out the body, allowing for better performance, but its work that otherwise wouldn’t be done.

If you train three days per week, an extra ten repetitions of those three movements equates to an average of 120 additional repetitions per month. That’s an extra 1440 chin-ups, push-ups, and bodyweight squats per year.

Think 1440 chin-ups will do a little “something” for your arms?

It’s always been my goal to build a body that matters—something that serves me in any situation. Something that makes me come alive. Don’t confuse this with being married to a barbell. Your body alone, be it running amok like a wildebeest, holding some gymnastics exercises, or doing a little bit more during your warm-up, can help get you there.

Anthony Mychal exists at the crossroad between fitness and athleticism. As a professional, he’s a writer appearing on the likes of T-Nation, LIVESTRONG.com, STACK, and Greatist. As a dude, he’s a self-proclaimed performance junkie that practices martial arts tricking. He splatters his ideas about building a body that matters on a weekly basis at his blog.