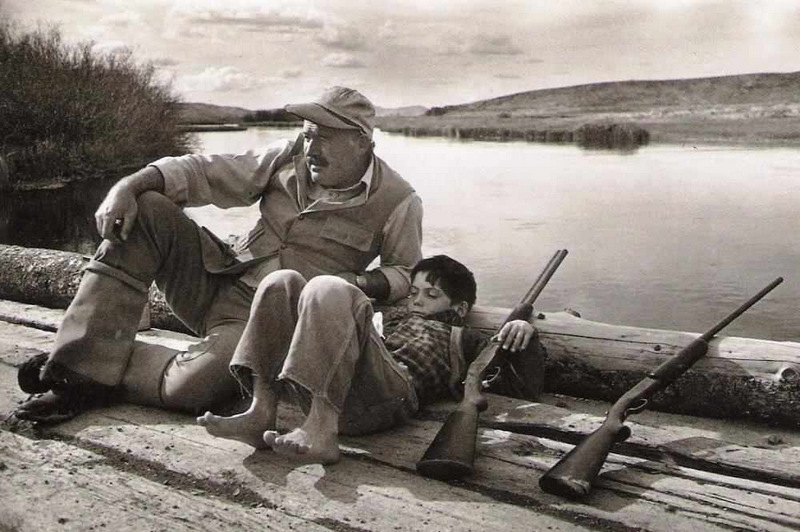 The mission of a man should be to squeeze as much life as possible from each day he’s here. By all accounts Hemingway accomplished that as much as any. The Dos Equis, Most Interesting Man In the World has to, in part, be modeled on some combination of Hemingway and Roosevelt and Churchill; men who understood what it meant to be a man, the adventures that manliness requires, and the duty that a man must create something lasting while he’s alive, to leave something for this planet, to leave a legacy of some kind.

I did a little research before I left for Italy, where I am now, sitting in a cafe about 100 meters from the Spanish Steps writing, to figure out how to make the best of my travels; to find adventures and to use my travels to improve, not change, but improve. After only 3 weeks here I’ve learned a lot. Some of these lessons will be incorporated into the article along with lessons I learned from reading about Mr. Hemingway.

If you don’t know much about the man, he’s a legend, and not just because of his literary works but of his escapades and adventures that weren’t bound by borders or continents or hemispheres. He was a masculine man. A hunter, a fisherman, a drinker, a writer, an adventurer. He did stuff, a lot of stuff, to put it simply; he lived. His travels were a big part of his life and shaping him as a man. We can learn from this. We can learn how to travel, to create memories and stories, to create our own legend.

The key word is adventure.

Men crave adventure. It’s in our blood to seek it out even if it kills us, and that’s not a bad thing. Death is a constant. We’re all going to meet it someday, it’s better to meet it with a smile having the time of our lives than creeping slowly to this meeting having never tasted the glorious adventure that this world has to offer. Alas, we look at how Hemingway traveled as a guide for adventure. Travel is adventure in and of itself, but when done as Hemingway did, it becomes something more, it becomes the stuff of legend.

Hemingway had a writing schedule. First thing in the morning, every morning, at 7 am he’d write or work. He’d get his writing done so when he was drinking and partying or hunting and killing, he could enjoy where he was fully without having something else nagging him, lingering at the back of his mind.

I learned this during the first week of my travels.

Even though I’m here for 3 months I had this sense of urgency that I couldn’t shake. I needed adventure. I needed some fun, laughs, and times had aided by the whiskey that I’m so fond of. So, during my first week here I partied. Only a few times, but still, I left my work to when I had the energy to work. I still got everything done, but it wasn’t done to the quality or the amount that I had grown accustomed to doing it at.

That first week was good. I learned a lesson and I have some stories in my back pocket if I’m ever in need of something to write about or talk about, but I’m glad it’s over and I’m back into doing what I’m here to do: write articles that help you guys become stronger and better, create products that do the same; to form an empire of sorts.

Now, from 6 am to 10 am I work on one single thing – a big project. Then, if it’s sunny, I venture into town, sit at a caffe, and write and work some more, like I’m doing right now. I need the scheduling to get my work done. It’s a schedule like this that gives me energy. As soon as I start to get weary of looking at a computer screen at 10 am in the morning I get up and change locations, ideally finding some scenery that will re-energize me and help me regain focus. Needless to say that isn’t difficult to do in Rome.

Alas, the lesson was learned by reading about Hemingway before I had to re-learn that lesson for myself. So, to travel like Hemingway get your work done so you can get out and enjoy your time free of guilt, but also because we’re all here to create something, and neglecting your business isn’t the way of a man, it’s how a boy acts, a boy lacking responsibility and accountability.

Hemingway did a lot and the only way to do a lot and do it so well is to consistently be where you are. It’s also how you learn your lessons. If your mind is constantly wandering you’re not going to learn the lessons you should learn whilst on your travels.

Being present and in the moment is also imperative to take advantage of the adventures that may come your way. They’re easy to miss, these adventures. They can be hidden within tribulation, when things are going wrong they can present themselves in disguise. When you’re seeing the town bring a notepad but don’t bring your whole work with you. It’ll tie you down and take away the opportunity to leap at the chance for adventure. So leave your work at the office when you’re out and about and ready to make things happen. Also leave the adventure outside when you’re in your cave working like a madman.

Don’t be timid in your travels.

I’m a quiet guy unless I’m around my pals. That has to change when I travel or else I’m going to be solo for the entire trip, which actually isn’t such a bad thing at all, I enjoy time alone. People also perceive timidness as rudeness, making it much less likely for you to make friends while you’re traveling.

Be energetic. Let your voice boom even if your accent is terrible and you’re not 100% sure if you’re saying the right things.

Jump in head first. From what I’ve read this is how Hemingway did it. He wasn’t a timid soul. That’s one thing you could never say about the man. And somewhere deep down there’s a lion dying to break free within you as well. You’re traveling. You’re not at home surrounded by people who know you and have figured out what to expect. These people aren’t expecting anything. Give them strength and energy. You’ll have a much better time traveling as a lion than you will as a mouse. Even if you look like an idiot, you’ll have fun looking like an idiot.

4. Accept Death Before You Travel

Worry and fear can crush an adventure. Safety is death. Danger should draw you toward something not push you away from it. Death is a scary thing. It scares the crap out of all of us but it’s going to happen and if we want to live an epic life and squeeze every ounce of life out of our time here, we have to come to a point where we accept our death as something that’s going to happen one day regardless of weather we’re safe or not.

We have to befriend our death. Get close to it. It’s in accepting our death that we open ourselves to the urgency of taking advantage of the time we have on this planet, and the time we have to create adventures on this planet. Hemingway is a clear example of someone who understood the simple fact that time isn’t something we have an unlimited amount of. Use it as best you can.

Be that guy, as Hemingway was, that’s the life of the party. Be that guy that people are drawn to. Not a follower but a leader. Not a timid soul but a warrior. Sometimes you’ll need the aid of the drink to bring this out of yourself, but as you do it more and more you’ll need the drink less and less. Use it as you will, just make sure it brings the personality out of you and allows others to see the awesome man you are when you’re “on”.

Some embark on extended travels in hopes of finding themselves. This is always a futile mission and one that never ends because it’s not how it works. A man can use travel to create himself, but if he’s looking to find himself he’ll be looking for a lifetime.

Use your travels to try new things, to face fears, do things you wouldn’t otherwise do, and to push yourself, extend yourself. You shouldn’t come home a new man, just a better one.

Hemingway was who he was no matter where he was. That’s what endeared him to so many. People can sense originality, they can also perceive someone who’s trying too hard to fit in, changing like a chameleon trying to be more like the people they’re surrounded by. Let travel broaden and toughen who you are, but it isn’t always a good thing to let travel change who you are.