Yesterday, as I left the boxing gym drenched in sweat, lactic acid still paralyzing my body, my pal and I started talking. The conversation went from business and money, to boxing and training, to being a man and an alpha male, and as we passed the Catholic cemetery by my house, we talked about the brevity of life.

The plots in the cemetery by my place, oddly, don’t have a suffocating effect like some cemeteries do. I told him about the cemeteries in New York that, as you take a cab from either JFK or LaGuardia, you’re bound to pass. The fields aren’t filled with flat tombstones like they are by my place, but rather large, grand, often century-old burial plots that remind you as much of Renaissance architecture, as they do of the bones resting underneath them. 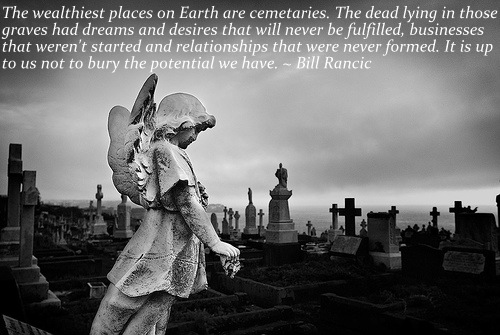 As I pass those cemeteries – the New York ones – I’m always struck by the notion that, at one point, the men, young and old, resting, becoming one with the earth, were just like me; young, ignorant to my future mortality, sometimes living as if I’ll live forever. They too, lacked urgency. If I could talk to them now, I’m confident the conversation would turn to a warning to seize the day, to never sweat the small stuff, and to risk everything for happiness, success, and love. They’d tell me to dream big, act bigger, and do what everyone else talks about, but never does.

They’d tell me that, indeed, life is shorter than you could ever imagine.

I pulled up to my house, body still locked in an all-encompassing cramp, our conversation having reached its end, as I lumbered up the stairs and straight to the kitchen, b-lining it for the fridge where my pot of gold awaited me – a can of beer – a feeling of excitement overtook me.

It’s exciting that I’m going to die (in a scary way). It’s invigorating knowing that I have one chance at getting this thing right. I’m not sure about you, but that makes me want to do massive things. Legacy-leaving type stuff. Big stuff is exciting. Small stuff that we know we can do and accomplish with ease, not so much.

This experience we’re in the midst of isn’t won by the timid soul. Those men and women, now bones in a grave, would agree. Life passes you by, make it a story worth telling, a movie worth watching.

World domination isn’t living a life suppressing others, true world domination only occurs when you lift others up, either by your words, but more likely by your epic, stuff-of-legend-actions. Aspire to live a life that generations to come will question if it really happened that way, or is this guy just a myth, a legend our grandfathers and grandmothers made up to teach us a less? All of those corny lines are true. You only live once, life is short, seize the day, be your own hero. Too many ignore these cliches and live with a cynical perspective and worldview. They love being angry, hateful, and spiteful.

Let’s not merely be dreamers, for dreamers often waste their lives in mediocrity, only aspiring for greatness as they lay down at night. Let’s be men of action. Men who do, rather than think. Yada yada, yes yes, I’ll get into the details. There are steps you can take to live that epic, fucking Legendary existence, with the body, brain, and balls that are the envy of the planet.

1. Do What Others Aren’t Willing To Do.

Success lies beyond what the majority is willing to do. And the majority is 99.9% of every population. World domination is reserved for the select few who dream big enough, but also act on those audacious dreams.

This article isn’t for the timid who aren’t willing to fight for greatness. It isn’t for the weak who look to others to solve their problems. This article is for those want change, want something better, and are willing to accept responsibility for their destiny. If that is you, then welcome. If it isn’t, then I bid you farewell.

2. Never Compare Yourself To Another Person.

One of the biggest failures I have, is in my constant comparison of myself to others; especially when it comes to success. I’ve had to work on this a lot. Success is a personal journey, with a very personal definition.

Each of our successes will come at different times. It’s just the way of the world, and it can’t be forced or cried over. Your journey is your journey. Everything you will accomplish depends on you. Whether that’s your ability to be open to opportunities, or your pure, hard, work.

This fact may depress you, or make you realize that your power is immeasurable. You can literally make the life you want simply by improving your thoughts, and taking action. Make sure it gives you an added sense of power, not depression.

The grass is always greener on the other side of the fence, and no matter how powerful you get, there’s always someone with something that you’ll envy if you let your mind wander down that road. Don’t let it. Don’t compare yourself to another person, let others look to you for that humbling comparison.

3. Stop Being So Damn Cynical.

If you’re going to dominate the world and accomplish the ballsy, audacious goals you have, you can’t look at the world through a cynical eye. The world is not out to get you. It doesn’t give a fuck about you, good or bad. That simple fact shouldn’t deter you from greatness, but inspire you to accomplish more knowing that whatever success you accomplish is done through merit.

The people of the world, though, do give a fuck about you. We’re all inter-connected on this beautiful blue planet. Our actions have consequences. The simple thing to do, if you want to dominate the world for a long period of time, is to do it through a path of kindness.

Jesus had more power than Hitler; Ghandi wielded a mightier sword than Mussolini. True power doesn’t come from oppression, but is rooted in inspiration.

People are good, and they want to be good. They want a leader that will inspire them to do good. The world, by and large, is selfless. Don’t write it off before you get in the ring and fight for your compadres.

4. Take Control Over Everything in Your Life.

Maintain a sharp focus on what you want in life, and make sure that everything else helps that goal, and doesn’t hinder it.

I got this one from Chris McCombs – good dude, brilliant writer, knowledge-bomb dropper. Whatever disruption comes into your life, don’t resist it, move with it. As Bruce Lee famously said, be like water. Flow with everything in your life.

If you resist everything, by only focusing on your plans, never deviating from your schedule, and stressing every time something doesn’t go as you plan it, you’ll lose track, you’ll snap, crackle, and pop; you’ll go nuts.

Being a part of the journey, and ebbing and flowing, will give you more energy, and bring you more peace. Never resist. Within everything, good or bad, there’s an opportunity for growth, flow with the highs and lows and allow them to add to your evolution, don’t resist and allow them to deter and destroy the man you’re becoming.

Why are you here? Simple question, right? But few can answer it, though many others have.

I’ll let you find your own answer to this question. I don’t think this is something that can be told, it has to be lived and experienced. For now, keep moving forward, let your reach exceed your grasp, and absorb everything you can from other people, from books, and from your experiences in life.

If you follow the previous steps to world domination, you’ll likely become a more assertive person. But you also need to practice assertiveness. Practice making quick and strong decisions.

Assertiveness is an often overlooked, but incredibly important attribute, especially if you’re after world domination.

Great men don’t follow timid souls. If you’re going to be a strong leader, act with strength! Know what you want and go get it.

Yes, fight. Fight to your very last breathe, until your bones are beneath the soil you now walk on. The world is dominated by fighters, warriors, those who don’t just fight for their own freedom, but for the lives of others.

Don’t ever backdown from a battle. Never let the Resistance keep you small and insignificant. Never let your fears quell the fire that burns within you to be great. Men are born warriors. We’ve been warriors since the dawn of time. It’s men who have defended our towns, families, and communities from evil men for thousands of years. It’s in our DNA to fight.

Fight for your right to live an epic, legendary life. Fight for your happiness everyday. Fight for something, anything! Make your life a battle. That battle doesn’t have to be physical, it can be a completely internal mental, or spiritual war you’re fighting, although the physical wars are always the most fun.

While this may scare you, it should also excite you. It should invigorate you, lend to epic adventures, incredible feats, and a life that is, truly, lived. If it doesn’t, how does it not?! Let this fear propel you to do things you otherwise wouldn’t do if you lived as though death weren’t around the corner. Die daily. Live Legendary. Continue Reading on Page 2 >>>